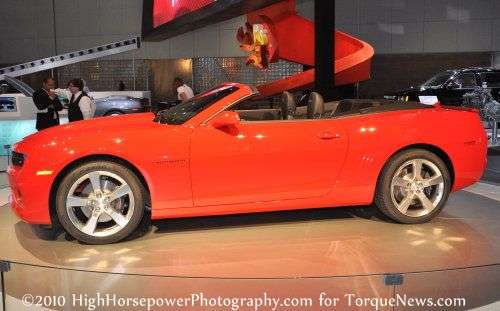 General Motors leads the US market in November 2010 sales

General Motors had a strong showing in November 2010, with all four of their existing brands showing year over year growth along with the company selling more vehicles than any other automaker in the US market.
Advertisement

General Motors saw a year over year growth of 21% but more importantly, GM sold more vehicles in the US than any other auto company – 168,739 in all – besting Ford Motor Company by over 21,000 vehicles. While these figures do not include the “dead brands” (Hummer, Pontiac, Saturn), the New GM ranked in the middle of the Detroit Big 3 in terms of year over year growth.

Buick was once again the top GM brand in terms of growth, with a 36% increase in sales over last November thanks to 11,725 vehicles sold. The LaCrosse was the top seller with 4,070 units sold, giving the sleek sedan a growth of 20 over last November. The Enclave was second in overall sales along with being the top in terms of growth, with 3,810 units sold accounting for a growth of 25%. The all-new 2011 Buick Regal climbed the sales charts to third with just under 2,000 units sold last month and with more trimlines on the horizon, we can expect to see the Regal continue to flourish in the US market.

GMC was the next best in terms of growth, with 27,590 trucks and SUVs giving the brand a 30% increase in sales over last November. The Sierra pickup was the top seller with almost 10,000 trucks sold in November and the popular GMC Terrain was second in sales with 5,902 units sold. The sales numbers for the Terrain also afforded it the bragging rights of being the top model in terms of year over year growth from GMC. The Acadia was third in both sales and growth, with 5,541 units accounting for an improvement of 43%.

Chevrolet was the weakest in terms of growth but it was the strongest in terms of sales volume, with over 117,000 vehicles sold in the month of November – trailing only Ford in total vehicle sales by brand. The Chevy Silverado pickup was tops in sales, with 25,619 trucks accounting for a growth of 16% over last year. The Equinox was second in sales with 15,387 units sold, which made the sporty crossover the best Chevy vehicle in terms of growth. The Impala was third in sales with just under 15,000 sedans sold accounting for a 19% improvement over last year. As a side note, the Chevrolet Camaro saw its most dramatic decline in sales last month, dropping 40% compared to last year as the sporty coupe sent out just 4,164 units in November.

We can expect to see GM’s numbers continue to grow thanks to new models like the Buick Regal and Chevy Cruze, along with steady help from the innovative new Chevy Volt which hits the market later this month. Should the Volt see the success that many people expect, GM is likely to spread the Voltec drivetrain technology to their other brands but with limited production capabilities right now, the Volt will not have a huge impact on the overall bottom line for General Motors.