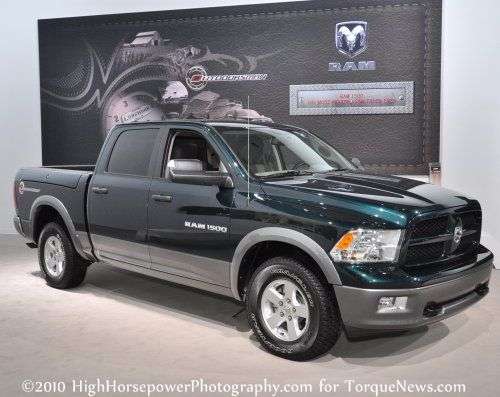 Ram and Jeep brands lead the pack for Chrysler in November

Chrysler’s Ram and Jeep brands were tops in the American auto industry last month in terms of growth over last year, helping the Chrysler Group to show a 17% improvement over November 2009.
Advertisement

The Ram and Jeep brands both saw huge improvements over November 2009, with the Ram trucks showing a 67% growth over last year (the best in the American market) and the Jeep brand finished second overall with 58% growth. Unfortunately, Dodge and Chrysler were among the few brands in the red, with the Dodge cars, SUVs and minivans showing a 12% decline in sales and the Chrysler brand saw a 23% drop in sales over November last year.

You would think that the Chrysler Group would flourish in a month with the Fiat brand was formally introduced along with a massive spread of new models for 2011. However, with many of those hot new models not coming to market until later this month, prospective Dodge and Chrysler shoppers seem to be holding off for those new models, causing the two car/minivan brands under the Chrysler Group halo to see declines in sales compared to last year.

The Ram brand was lead, as usual, by the sales of the popular Ram pickup with over 18,000 trucks sold in November. Compared to just 9,787 Ram pickups sold last November, the model formerly known as Dodge Ram saw a hefty 86% increase over last year. The Dodge Dakota (or is it Ram Dakota now?) also showed growth over last year, improving 26% as the mid-sized pickup saw 834 units leave dealerships last month. The now-defunct Dodge Sprinter, which was a joint project between Chrysler and Daimler, continues to linger on the books, this month showing a 100% decline as none of the utilitarian Mercedes-based cargo vehicles were sold last month.

Next, the Jeep brand showed a healthy 58% gain over November of 2009. Not surprisingly, both sales and year to year growth figures were lead by the 2011 Grand Cherokee with 10,984 SUVs sold last month accounting for a 256% increase over last year. The tried and true Wrangler was next in terms of sales volume with 6,552 units leaving the lots (a 34% increase over last year) and the compact Jeep Patriot was second in growth, with 43% more vehicles sold in November 2010 than November 2009.

The Dodge brand was the next strongest in terms of growth, although Dodge was one of just a few brands to show a decline in what proved to be a fairly strong month for American automakers. The usual top dogs from Dodge; the Charger and Grand Caravan both saw negative growth in November, presumably due to the fact that both of those models will be available in their new 2011 trim as soon as this month. While showing a year to year decline of 28%, the Grand Caravan was still the top mover from Dodge with just shy of 6,000 minivans sold last month. The Dodge Caliber was second in terms of sales with 3,145 units sold, which accounted for a growth of 666% over last year and the Avenger rounded out the top three Dodge products in terms of sales with 2,800 cars sold last month. The Charger saw one of its biggest drops in ages, showing a year over year decline in sales of 42%, as just 1,963 examples of the muscular sedan were sold in November.

Chrysler was the worst performer in terms of sales growth for the Chrysler Group with the ONLY vehicle showing positive growth last month being the PT Cruiser – that has been discontinued. Chrysler dealerships sold 441 PT Cruisers last month, accounting for a 42% improvement over last year as dealerships sell off the remaining stock of the retro-styled sedan and convertible. As expected, the Chrysler Town & Country was the top seller for the brand, with 6,543 units sold last month and the only other two models available from Chrysler, the Sebring and 300 sold 1,389 and 1,291 units respectively.

It is disappointing for Chrysler fans to see two of the brands well into the red in a month where many brands flourished but when you consider the fact that Chrysler and Dodge both have an almost entirely new lineup for 2011, it makes good sense why buyers are holding off right now. We can most certainly expect to see those two brands jump back into the positive end of things once the new Charger, Challenger, Durango, Journey, Avenger, 200 and 300 hit the market. Also, with the Fiat brand launching this month, the introduction of a new brand should help Chrysler to show stronger growth figures as we finish up 2010.