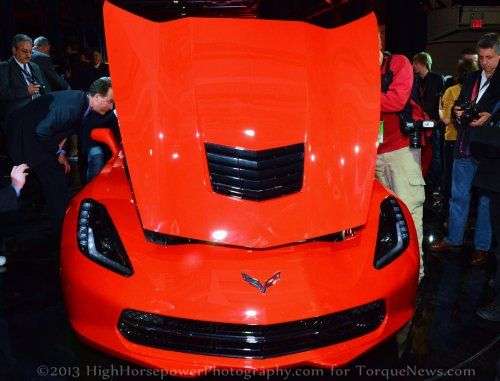 GM explains the many vents of the 2014 Chevrolet Corvette Stingray

General Motors has continued to keep the steady flow of information on the new 2014 Chevrolet Corvette Stingray – recently offering up two new videos that look at the exterior design of the new C7 Corvette while also explaining the function of the new vents in the hood and on the rear quarter panels.
Advertisement

The exterior design of the 2014 Chevrolet Corvette Stingray is unquestionably quite a bit bolder than any other generation except maybe the very first Corvette thanks to the design cues that are unlike anything else that we have ever seen on a stock “base” Corvette.

While many people have either glowing positive reviews or angry, negative views on the 2014 Stingray – there is no question that this is a car designed with supreme aerodynamics in mind. Along with the sleek lines, the aggressive stance and the low roofline, GM engineers have added vents and ducting around the car that look awesome but more importantly – these vents improve performance through advanced cooling techniques while also improving the aerodynamic properties of the 7th generation Corvette.

General Motors has offered up two new videos that take a closer look at the exterior design of the 2014 Chevrolet Corvette Stingray and if the first one looks a little familiar, it is because several excerpts from the video titled 2014 Stingray Revealed: Exterior Design were used for one of the teaser videos leading up to the 1-13-13 debut of the new American sports car.

However, unlike those cruel teasers that only showed us a quick glimpse here and there – this new video shows the C7 Stingray in the various stages of design and testing. Best of all, this video shows the 2014 Corvette in General Motors’ massive wind tunnel which gives us a great look at the aerodynamic efforts in action. This first video talks about the design of the front end relative to the radiator and how the 2014 Corvette takes air in through the large grille to cool both the engine and the braking system while the air that has been heated as it passes through the radiator is quickly vented to the atmosphere through the large central vent in the hood.

The 2014 Chevrolet Corvette Stingray hood is modeled after the hood of many endurance race cars that need to be perfect both in aerodynamics and in heat removal. As cool air passes through the radiator, it removes heat but that heat is then captured in the air coming through the radiator and in many cars, that heated air then travels around the engine where some of it is taken in as engine intake air while the rest vents around the edges of the hood and out the bottom of the car.

In the 2014 Corvette, the air passing through the radiator is channeled quickly up through the opening in the front portion of the hood. This prevents that hot air from gathering around the engine so the heat is removed more effectively. Also, the turbulence created by the cooling air “trapped” in the engine bay can cause front end lift while the cooling system of the 2014 Corvette actually provides better downforce at higher speeds.

The 2014 Chevrolet Corvette Stingray also features some new vents located high on the rear quarter panels. These carbon fiber vents take in cool air traveling along the upper edge of the C7 and channel it to an enhanced cooling system for both the transmission and the rear differential. After that air does its cooling duties, it exits through the vents located around the taillights of the new angular Corvette rear end. Again, these vents on the quarter panels and across the back end look great but thanks to years of experience on the race track – GM has been able to add these previously race-only features to the standard “base” 2014 Corvette Stingray.

The second video below is an interview piece with GM Executive Chief Designer Tadge Juechter who looks at the overall design process of the 2014 Corvette Stingray. Juechter looks at the vents we discussed above along with the aluminum chassis, the steering and more. While this piece doesn’t offer the in depth detail of the first video below, this second clip shows a variety of shots of the new Stingray at its 1-13-13 debut in Detroit – which is something that any Corvette lover will enjoy.

Click any of the thumbnails above on the right or along the bottom of this article for a closer look at the 2014 Chevrolet Corvette Stingray from the Detroit debut!

Anonymous wrote on February 1, 2013 - 10:48pm Permalink
wow those gm engineers are smart they put vents in the hood to get the heated air out of the engine bay just like ford has done on the cobras & gt500's from 03 till now.