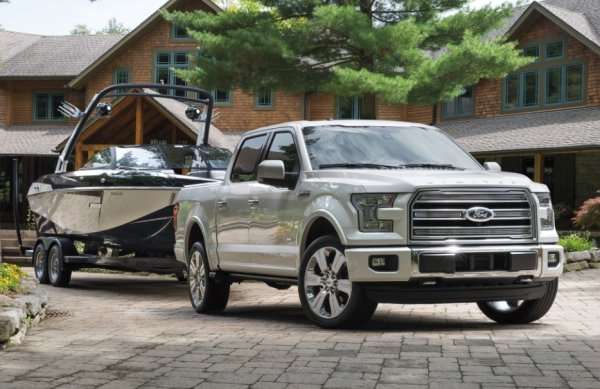 Ford Motor Company announced earlier this year that the 2016 F150 would benefit from a new top of the line package named the Limited and while we speculated that it would be expensive, the pricing is far beyond what we would have guessed – with the four wheel drive version starting over $63,000.
Advertisement

The new Ford F150 is packed full of modern technology, including the lightweight aluminum body panel, and that leads to a higher price for the consumer. Prices across every segment have increased over the past decade, but with full sized pickups continuing to sell like hot cakes even amidst record-high prices, Ford Motor Company has rolled the dice with an even more expensive luxury package for the 2016 F150.

The Most Expensive Half Ton Truck in America
The 2015 Platinum with four wheel drive starts at $56,205, making it the most expensive F150 and the most expensive half ton truck in the segment for the 2015 model year. The most expensive 2015 Ram 1500 Limited starts at $55,375 and the 2015 Chevrolet Silverado 1500 High Country starts at $52,785, so the top of the line F150 was already the priciest, but it seems that Ford felt that there was the need for an even more luxurious F150 with an even bigger price tag.

The pricing of the 2016 Ford F150 Limited might seem crazy to many new car shoppers, but what is even crazier is the fact that the F150 is really just a premium appearance package ranging in above the current F150 Platinum.

Finally, the F150 Limited comes with the 3.5L EcoBoost V6 with 365hp and 420lb-ft of torque, which will allow owners to tow up to 10,100, so this pricey luxury truck will still get its hands dirty when needed.

Where Does the Pricing Stop?
So, I have no doubt that the 2016 Ford F150 Limited will be the nicest Ford truck ever, if not the nicest half ton truck sold in America. At $63,100, it should be the nicest truck sold in the country, but I have to wonder where this steady rise in truck pricing will end.

I am generally one to point out that trucks are expensive because they can do more work than cars, and as long as the trucks are selling, no price is too high. If Ford sells a couple thousand F150 Limited trucks with these prices, it will show that there is a market for very expensive trucks, but with higher premium models comes a gradual increase in the base model prices – and at some point, truck sales will begin to suffer when prices get too high.

However, until that day comes, Ford continues to sell huge numbers of F150 pickups fitted with the high end amenities and the big price tags. The Limited might be a hit, just like the Platinum, except with a much bigger price.