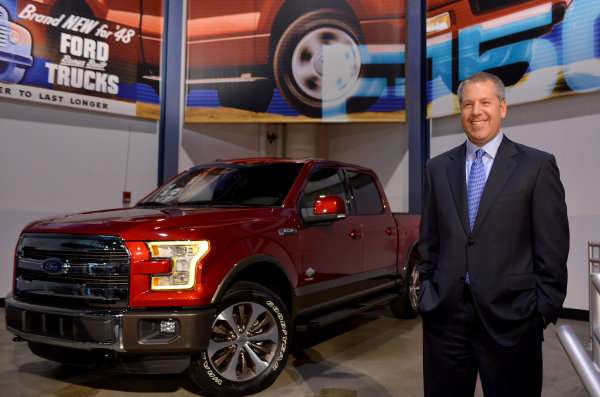 Ford Motor Company is expecting such a boom in sales due to the introduction of the next generation F150 pickup that the automaker is adding 850 workers at the Dearborn Rouge Truck facility, adding to the 14,000+ new US manufacturing jobs created by Ford as part of their agreement with the UAW in 2011.
Advertisement

The 2015 Ford F150 is like no other truck ever sold in the US due to its heavily aluminum body construction. This makes the new F150 lighter than ever and more efficient than ever while still preserving all of the hard working abilities that has made it the bestselling truck in America for, well, pretty much the entire modern automotive era. With the new F150 being better than ever in every conceivable way, the Motor Company is expecting the sales numbers to shoot through the roof and to prepare for this massive influx of F150 sales, the automaker will hire 850 new hourly workers at the Dearborn truck facility near Detroit.

“Today we celebrate the commitment to excellence that the hardworking men and women of the Rouge demonstrate every day,” said Jimmy Settles, UAW vice president and director of the National Ford Department. “The technology in the all-new 2015 F-150 is something the auto industry has never seen before, and our UAW members are poised and excited to build the next generation of America’s favorite truck.”

New Jobs in Dearborn
The Dearborn “River Rouge” truck plant is one of Ford’s biggest and most active with more than 4,000 workers teaming up to build the bestselling truck and the bestselling vehicle in the US market. However, to build enough 2015 F150 pickups to meet the expected demand, Ford believes that they need to increase the Rouge workforce by about 20%, bringing in 850 new hourly workers to man the bustling assembly complex.

Included in these 850 new jobs are more than 500 at the actual Dearborn truck plant, almost 300 at the Dearborn stamping facility and another 50 at Dearborn Diversified - adding up to a total of roughly 850 new workers who will help build the 2015 Ford F150. In total, the Dearborn truck facility will employ almost 5,000 hourly workers (once these 850 have been added).

"As customer anticipation for the all-new F-150 continues to build, today we are bringing on 850 new jobs to help meet the market demand for the toughest, smartest, most capable F-150 ever,” said Joe Hinrichs, Ford president of The Americas. “The new truck sets new standards for the future of tough – right down to how it’s built.”

Major Changes for the Dearborn Truck Plant
While most generational changes to a vehicle force an automaker to make changes to the production facility in which they are built, no vehicle has ever required the massive amount of change as the 2015 F150. Due to the use of aluminum throughout the body, Ford had to basically revamp the entire assembly line to handle the new materials. Ford calls those changes the “largest manufacturing transformation in decades” and a transformation like that costs big money – money that Ford doesn’t want to lose by making a mistake in gambling on an aluminum body.

This is one more reason that I expect that Ford’s homework will lead to the 2015 F150 being a total success, as I don’t expect that the automaker would have gone through all of these steps for a vehicle that wasn’t guaranteed to shine.

Major American Manufacturing Job Creation at Ford
As part of the 2011 contract talks between Ford Motor Company and the UAW, the automaker agreed to create 12,000 new jobs around the US by 2015. With about two and a half months left before 2015 arrives, Ford has not only met that number, but they have exceeded it by a significant amount.

This latest round of job addition brings the total since the 2011 agreement to more than 14,000, with more than 4,000 of those jobs being located in the Detroit Metro area. In addition to the 850 being added at the Dearborn Truck plant, Ford added 1,800 at the Michigan Assembly Plant where the Ford Focus is built, 1,700 at the Flat Rock plant where the Ford Mustang and Ford Fusion are built, 240 at the Van Dyke transmission plant and another 150 at the Livonia transmission plant.

“Ford’s announcement is more positive news for the citizens of Michigan and a further sign of the comeback of Michigan, manufacturing and the auto industry,” said Michigan Gov. Rick Snyder.