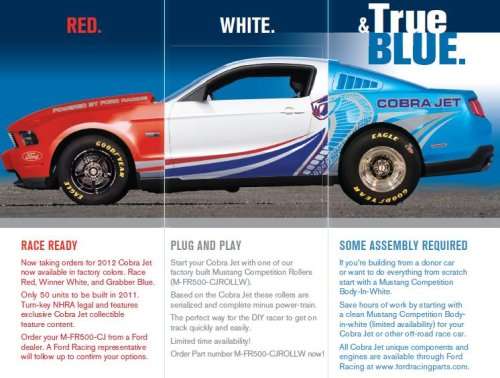 Ford unveils the 2012 Cobra Jet at PRI in Orlando Florida

While we were privy to most of the 2012 Cobra Jet (part number M-FR-500-CJ) information ahead of time thanks to a Puerto Rican Ford dealership posting the information on their website (click here for more on that), along with the official debut of the 2012 M-FR-500-CJ in Orlando we learn the price of this new factory-built drag car - $91,990 for the entry level 2012 Cobra Jet. If you want the all-out, loaded up 2012 Cobra Jet including the 500hp engine package and an extensive graphics package it will set you back an additional $11,990 for a final price of $103,980.

The 2012 Cobra Jet Mustang is powered by the same aluminum 5.4L V8 found in the current Shelby GT500 and mated with the “entry level” 2.3L TVS supercharger and twin 65mm throttle bodies, it puts out a healthy 430hp. This race-prepped engine is mated to a 3-speed C4 transmission also built for racing purposes and the power is sent to the wheels via a 9” Ford rearend and a set of 4.29 gears. Weld Racing wheels wrapped in Cobra Jet-branded Goodyear racing slicks help make the most of that power along with drag suspension setups in the front and rear. Some of my readers are surely questioning the output of 430hp but considering the times turned out by previous Cobra Jet models, we can take a guess that the power output is under-rated. Inside, the 2012 Cobra Jet is all function, with a set of race seats featuring safety harnesses and an NHRA roll cage approved for times down to the 8.50 range. You can select the 2012 Cobra Jet in Race Red, Grabber Blue, or Winner White with no additional charge and should you opt for the additional Cobra Jet graphics, the colors of the decals correspond with the body color chosen. This package (minus the graphics) will run you $91,900 and while that is a hefty chunk of change for a modified Mustang that carries an MSRP of around $30,000 – keep in mind that this is not your typical Mustang GT with some modifications but rather a fully, 100% ready to race drag car.

Now, if you have an extra $10,000 laying around and want even more bang for your buck(s), you can step up to the optional 4.0L Ford Racing/Whipple supercharger package. In the 2010 Cobra Jet this package featured 500 horsepower and yielded a handful of standing class records, with elapsed times dipping into the mid 8 second range. If you do the math – 500 horsepower in a 3,200lb car – this is a clear indication of under-rated horsepower numbers as even with 500 wheel horsepower in a 3,200lb car you are still unlikely to be able to turn out times in the 8 second range even with flawless traction. In any case, the 2010 Cobra Jet Mustang set the bar high for factory-built drag cars and Ford Racing comments that the actual horsepower rating of the 2012 Cobra Jet is “To Be Decided” – which means that we can expect more power out of the new CJ Mustang. Also, the 3-speed transmission is replaced by a 2-speed race transmission and specific rearend gearing ideal for the 4.0L Ford Racing/Whipple supercharger package. All of this can be yours for just $101,985 without the flashy Cobra Jet graphics package and again, while that may be a lot of money to most people, it is a reasonable price for a factory built, turnkey mid 8 second drag car.

All 50 of the 2012 Ford Racing Cobra Jet Mustangs built will come off of the same Flat Rock Michigan assembly line as the rest of the new Ford Mustangs with production beginning in March or February of 2011.

Click here for a look at the Ford Racing document officially announcing the 2012 Cobra Jet Mustang.

Check out the gallery below for a look at the 2010 Cobra Jet at its SEMA debut!