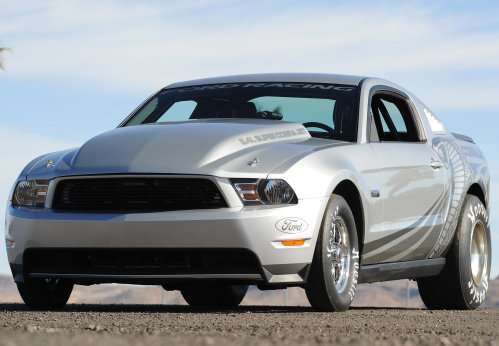 The Ford Mustang Cobra Jet drag racing package is back for 2012 with a handful of changes to build on the Cobra Jet’s record setting reputation with improved performance for the 2012 model year.
Advertisement

Ford Motor Company has made quite a bit of noise over the past few years with the introduction of their Cobra Jet Mustang – a non-street legal, purpose built race car designed specifically for NHRA, IHRA and NMRA stock-based drag racing classes. Thanks to the Cobra Jet order guide posted on the MiCasaFord.com website, we now know what Ford Racing has in plan for the 2012 Cobra Jet.

Surprisingly, the new 5.0L V8 is not yet offered, as Ford instead sticks with the 5.4L engine offered in the 2010 Cobra Jet, along with the current Shelby GT500. For 2012, this 5.4L V8 receives a new aluminum engine block, Manley forged engine internals and engine tuning specific to the 2012 models. This 5.4L V8 offers 430hp with the 2.3L Whipple supercharger and for the ultimate Mustang drag package, the Super Cobra Jet package adds a 4.0L supercharger unit – upping the power output to over 500hp. While these power numbers may seem low considering the 540hp output of the Shelby GT500 and the 412hp of the 2011 Ford Mustang GT, the heavy dose of modifications around the Cobra Jet package allowed the 2010 Mustang CJ with the 500hp engine option to dip in to the 8 second quarter mile range – making it one of the winningest cars on the super stock circuit.

Click here for a closer look at the 2010 Ford Mustang Cobra Jet courtesy of Ford.

The 5.4L supercharged V8 in the 2012 Mustang Cobra Jet is mounted to a 3-speed C4 automatic transmission built specifically for race duty with power being sent to the rear wheels via a 9” Ford rear differential and 4.29 to 1 gears. That power is then put to the ground by a set of Goodyear drag radials specially designed and branded for the 2012 Cobra Jet, with Weld Racing providing the lightweight race wheels.

Helping to make the most of the available power from the 2012 Cobra Jet, changes include a revised (and fully adjustable) front and rear suspension, optimized for ideal traction on the drag strip while also reducing overall vehicle weight. Manual, low-drag racing brakes have been provided by Strange Engineering and like the rest of the 2012 Cobra Jet, this unique braking system helps to reduce the car’s weight.

In addition to the lightweight wheels and brakes, the 2012 Cobra Jet does away with a great many items not needed for drag racing like ABS, side mirrors, a stereo system and air conditioning but it still retains all of the required items to conform to the rules of the “stock” classes within the NHRA, IHRA and NMRA. The safety items added to the new Cobra Jet allow races to run as quick as the 8.50 range – making it one of the quickest available “stock” cars on the market for drag racing but if you want one, you had better contact Ford Racing quickly as only 50 examples of this awesome new Cobra Jet Mustang will be built for 2012.

Click here for a look at the Ford display from the 2010 LA Auto Show and for more information on the 2012 Ford Mustang Cobra Jet, click here for the MiCasaFord.com website.