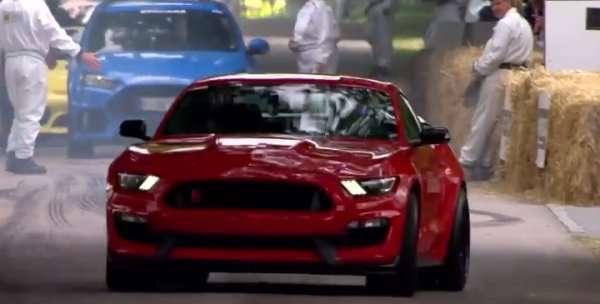 This past weekend, the new Ford Shelby GT350R Mustang made an unusual first track appearance, as the Top Gear’s Stig blasted along the course of the Goodwood Hill Climb – looking and sounding incredible in the process.
Advertisement

The new Ford Shelby GT350R Mustang is expected to be the most track-capable, road-going Mustang of all time and there is a chance that it could beat the Camaro Z/28, making the new GT350R the most track-capable muscle car of all time. Along with the more pedestrian GT350, the GT350R will arrive later this year, but it has already become a dream car for many, simply based on its appearances at auto shows around the country since the debut last year in LA.

While there have been plenty of official Ford videos showing the new GT350R Mustang flexing its muscles on the track, the Ford team headed to the Goodwood Festival of Speed this past weekend to make the on-track debut with the new GT350R Mustang – and they caught the impressive run on film for us all to enjoy.

The Goodwood Hill Climb
Each year, the Goodwood Festival of Speed plays host to some of the greatest cars in the world and many of those cars take on the Goodwood Hill Climb. This event is no longer officially timed due to safety concerns, but the hill climb still allows spectators to see some of the world’s most incredible performance cars old and new being pushed to their limits. Because of the attention that Goodwood gets, it has become a popular location to show off new performance cars in action, but in a venue where the performances really cannot be criticized.

In other words, the Goodwood Hill Climb allows companies to show off how well a vehicle performs, but since it isn’t an actual competition, critics of a vehicle cant point at the Goodwood performance since there is no official timing. Basically, so long as a car looks good and sounds good charging up the Goodwood course, everyone is happy.

The GT350R at Goodwood
The Goodwood Hill Climb really is the perfect place for Ford to show off the new Shelby GT350R in a high performance venue, as the twisty road course shows how well the new Mustang can handle the corners in front of a crowd that appreciates handling. To get the new GT350R up the hill in solid form, Ford employed the driving skills of Ben Collins – the man who formerly served as The Stig on Top Gear.

After a burnout that spanned much of the opening straightaway, The Stig blasted up the Goodwood Hill Climb in impressive fashion, with the roar of the 5.2L flat plane V8 providing a stunning soundtrack for the short video.

So how well did the Shelby GT350R Mustang do? Again, there is no official timing system in the modern event, but the official record from back in the day stands around the 41 second mark, which was set by an F1 race car. The GT350R Mustang blasted through the finishing gate around the 1:05 mark and it looks like it left the starting gate right around the 5 second mark, so the run took somewhere in the area of 59-61 seconds. This is quite a bit slower than the record time, but this is a 100% street legal Ford Mustang that was being driven hard – but not to set record times. At the same time, the Mustang made it up the hill quickly enough that it was about to overtake the car ahead of it on the track in the last run to the finish line.

Based on what we can see in this video, the Ford Shelby GT350R Mustang should prove to be a real track terror when it arrives. In the meantime, crank up your speakers and enjoy the sound of the newest super-Stang in action at Goodwood.