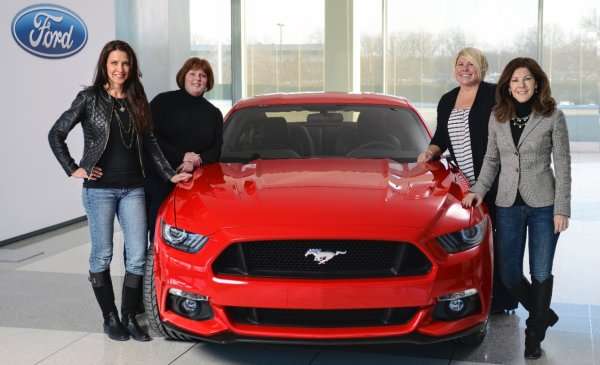 The Ford Mustang has been named the Women’s Car of the Year for the global automotive market, with a panel of women around the world testing hundreds of cars and picking the Mustang as their favorite for 2016 – and the Ford Focus RS finished a close second.
Advertisement

The Ford Mustang is the bestselling sporty car in the world, leading a handful of markets around the globe in 2-door, performance-minded coupe sales, and that has led to a long list of awards in the US and abroad. Well, with so many women buying new cars, a collection of female automotive journalists from around the world have teamed up to select the annual Women’s World Car of the Year and for 2016, those women chose the Ford Mustang as their favorite new car to buy in the world.

This is the only global automotive award which has a jury comprised strictly of women.

“Ford Mustang is surprisingly loved by women who are after a sexy, sporty, masculine car that turns heads,” said Juliet Potter, Women’s World Car of the Year jury member from Australia. “Combining the car’s silver-screen celebrity status with real-life practicality, Mustang screams, ‘I am in control!’ and delivers the same behind the wheel with above-average grip and suspension.”

The Women’s Car of the Year Jury
Since you might not have heard of this award before, here is a quick look at the Women’s World Car of the Year. As I understand it, there is no association between this award and the magazine Women’s World, but instead, a group of 18 female automotive journalists from 14 different countries work together to pick what they believe to be the best car on sale, in the world.

On the award website (click here for a closer look), those female jurors are all featured and in looking through them, you will see that the USA, Australia, Vietnam, Turkey, Estonia, The Netherlands, Spain, Scotland, Ireland, New Zealand, Argentina, Canada, India, the UK and South Africa are all represented – so there are 18 jurors from 15 different countries around the world, and when they dug through all of the cars on the market which meet their criteria, the Ford Mustang was their favorite new car.

294 Competitors in the Running
While the Ford Mustang’s title as the Women’s World Car of the Year for 2016 doesn’t come as a huge surprise when you consider the popularity of the new Mustang around the world, the win did not come easy. The Mustang competed with 294 cars to win the title, literally beating every car from every major automaker in the world and when it came down the finish line – the Mustang won by just a single point.

The runner-up for the 2016 Women’s World Car of the Year was the Ford Focus RS, so even if the Mustang hadn’t won, the Motor Company could have stood a good chance of still taking home the title from the world’s only all-female jury.