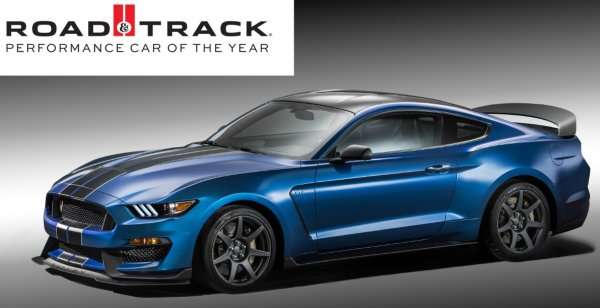 The new Ford Mustang is selling like hot cakes and it has proven to be a massive success among buyers and the media, so it comes as no surprise that the bestselling sporty car in America has piled up a few more titles in the past week – including being called the best stunt car on the market, being named the Road & Track Performance Car of the Year and being named the Hottest Car of the 2015 SEMA Show.
Advertisement

The 2015 Ford Mustang is a smashing success. It has already topped the 100,000 unit sold mark with two months left in the year. It has basically sold out in several global markets. It has won awards from media outlets around the world.

While there were skeptics who questioned the exterior design, there is no question that the 2015 Ford Mustang is better than ever in pretty much every way, and for the 2016 model year, the Mustang lineup benefits from the full-scale arrival of the new Shelby GT350 and GT350R. These models were offered in very short supply for 2015, but in 2016, the two highest performance Mustangs will be available to more dealerships and more buyers around the country. Sales may slump a bit when the 2016 Camaro hits the market from coast to coast, but the Mustang still has a performance advantage thanks to the new Shelby models.

Speaking of the Shelby GT350 and GT350R Mustang, the folks at Road & Track have named the new high performance Mustang their best performance car for 2016. The crew at R&T went so far as to say that the “GT350R is the Mustang that all Mustangs have been waiting to become.” Having been in the GT350R for a few hard laps at Grattan Raceway, I am inclined to agree wholeheartedly with this award.

Stig Loves the Mustang
Next, while not exactly an award, the Ford Mustang GT has been named the Best Stunt car by Ben Collins – the man who served as the superhuman driver on BBC’s Top Gear. Collins pilots the new Mustang GT and a variety of other very high performance cars in his new BBC film “Ben Collins: Stunt Driver”.

“The point of this adventure was to find the perfect car for an epic, high octane, Hollywood-style car chase, and it’s the iconic Ford Mustang that gets top billing,” Collins said. “Mustang has starred in many a classic car chase during the past 50 years, and is still the stunt driver’s weapon of choice to leave the bad guys standing in a cloud of tire smoke.”

The trailer for the Stunt Driver flick is available below and while we don’t know all of the details – we do know that the Mustang GT ends up winning the driving competition.

Mustang is SEMA’s Sweetheart
Each year at the SEMA Show in Las Vegas, the SEMA organizers give an award to the vehicles that are found to be “the most popular vehicles the organization’s members feature in their displays at the weeklong event”. Basically, the SEMA Show crew picks the vehicles that are the most popular among the different classes. These awards include the Hottest Car, the Hottest Truck, the Hottest Sport Compact and the Hottest SUV and Ford vehicles have, claimed a few of these awards over the past few years. However, at the 2015 SEMA Show, Ford Motor Company claimed three of the SEMA top vehicle awards, with the Mustang taking Hottest Car, the Focus taking Hottest Sport Compact and the new F150 was named the Hottest Truck. This is the first time that one automaker has claimed three awards in one year.

“Winning SEMA’s hottest vehicle awards for Mustang, Focus and F-Series is a great affirmation of the popularity of Ford vehicles with this trendsetting part of the market,” said Dave Pericak, director, Ford Performance, who accepted all of the honors at the annual awards breakfast. “We’re proud the aftermarket has embraced these three vehicles with as much enthusiasm as our customers invest to personalize their Mustang, Focus and F-Series.”