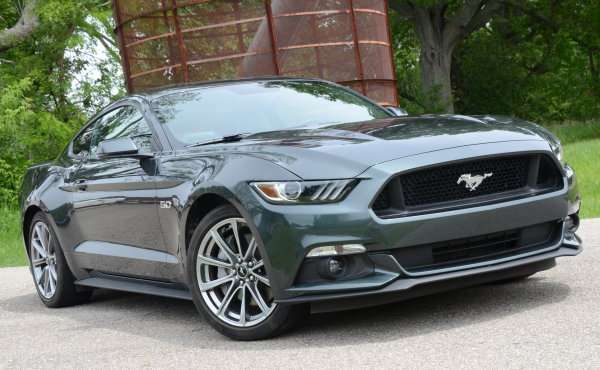 If you are shopping for a 2-door sporty car here in the USA and you want as much power as possible for as little as possible, the 2016 Ford Mustang GT is still the top dog – beating the best performance cars from around the world in bang for the buck.
Advertisement

A few things to keep in mind before we get into explaining how the 2016 Ford Mustang GT offers more bang for the buck than any other sporty coupe sold in the American market.

First, the list below has numbers for both the 2015 and 2016 model years, depending on what is available right now. This comparison looks at all of the cars that are available for ordering now or in the next few months, so you will find that most of the cars are from the 2016 model year, but with the Hyundai Genesis Coupe, the Dodge Viper, the Dodge Challenger and the Chevrolet Camaro still working with the 2015 model year pricing. However, since we have preliminary pricing for the 2016 Camaro, those figures are included as well.

Next, you will notice that there aren’t any high performance exotics on the list topped by the 435hp Ford Mustang GT, because those cars all cost far, far more than the cars atop this list. To make my point, the end of the list includes the Nissan GTR and the Lamborghini Aventador, simply to show the difference in price per horsepower between the top cars and those popular supercars.

Finally, the list includes cars in their least expensive form for the given trimline, so in the case of the 2016 Chevrolet Corvette Stingray, I’ve used 455 rather than the 460 you get with the performance exhaust. By using “base” forms of each trimline, that allows me to not take into consideration the cost of adding things like performance exhaust systems and such. Ive also not included the Subaru BRZ since it is just a pricier version of the Scion FRS and the new Mazda Miata isn’t included because it is only available as a convertible and because of that, its price per HP would be the highest on the list next to the Nissan GTR.

Best Bang for the Buck Coupes in the US
As mentioned above, the Chevrolet Camaro V6 and Ford Mustang GT offer the most power per dollar, and the list is dominated by the American automakers for the most part with one interesting exception. The Hyundai Genesis Coupe – a car which is often forgotten in performance car discussions – packs 348 horsepower with a base price of just $27,645, giving it a price per horsepower of $79.44. This makes the Gen Coupe the only sporty car in American under $80 aside from the 2015 V6 Camaro and the 2016 Mustang GT.

The 2015 and 2016 Camaro SS are 4th and 5th on the list, showing that GM did a nice job of maintaining the same level of price per horsepower with the 6th generation. In 6th place the first Dodge shows up, with the 485 Challenger R/T Scat Pack being the most affordable car in America with more than 460 horsepower. The Scat Pack Dodge is followed by the new Mustang V6 and Mustang EcoBoost back to back in 7th and 8th while the 2015 Hellcat Challenger with 707hp sits 9th overall – although the Hellcat is getting a price increase for 2016 that will push it down the list a few slots. Fortunately, the only cars between the 2015 and 2016 Hellcat Challenger are the R/T and SXT V6 versions of the Dodge muscle car and the new Shelby GT350 Mustang is nipping at the heels of the 2016 Hellcat.

The Nissan 370Z is the first Japanese car to hit the list in 14th while the 2016 turbocharged 4-cylinder base Camaro sits in 15th and the 2015 Camaro ZL1 rounds out the top 15 – while also being the last car on the list under $100 per horsepower.

The last group of the list includes cars with much a higher price per HP ratio, as well as having some monster horsepower cars like the Dodge Viper and the Chevrolet Corvette Z06. You will also find the Scion FRS, which might explain why the car doesn’t sell so well in the US. Again, the huge jump to the Nissan GTR – the most affordable foreign supercar sold in America – is simply there to display the huge jump of the high priced exotics.

Ryan wrote on September 24, 2015 - 7:43pm Permalink
Must be a ford fan. Obviously the chevrolet v6 was the winner based off this list. By the way sports cars are a lot more than hp. I feel cheated by the title now.