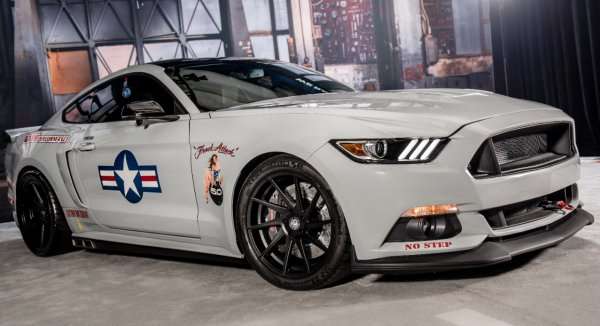 The annual Hottest of SEMA Awards have been announced and for the second year in a row, the Ford Mustang, Ford F150 and Ford Focus have been named the most popular cars in their respective segments – covering the coupe, truck and sport compact groups.
Advertisement

Each year, the SEMA Show in Las Vegas awards the “Hottest” vehicle in several different segments based on the number of individual vehicles representing the given models. These awards are determined by an actual count of vehicles in attendance and they have been handled this way since the “Hottest of SEMA” awards were introduced back in 2010.

For the second year in a row, the Ford Mustang, the Ford F Series and the Ford Focus have proven to be the most popular of their classes.

Ford’s Hot Trio of SEMA 2916
The Ford Mustang was named the Hottest Coupe of SEMA for 2016, marking the fifth straight time that the Mustang has been the most popular car at the huge Vegas convention. The Chevrolet Camaro claimed the title in 2010 and 2011, but since then, the Mustang has dominated the SEMA floor.

The Ford F Series was named the Hottest Truck of SEMA for the second straight time and the sixth time in the seven years of the award. The only time that the Ford F Series wasn’t the Hottest Truck of SEMA was back in 2014, when the Chevrolet Silverado nabbed the title. Also, while the entire F Series is recognized in this award, the F150 comprises the vast majority of the trucks on display – easily outnumbering the groups from GM, Ram and Toyota.

Finally, the Ford Focus was named the Hottest Sport Compact of SEMA for 2016, also making it a back-to-back win for the popular sedan and hatchback. The Focus hadn’t won the award prior to last year, with the Fiat 500 winning the first title back in 2011, the Scion FRS winning in 2012 and 2013 and the Honda Fit winning in 2014. With the arrival of the Focus RS, we aren’t likely to see Ford’s grip on the sport compact segment slow anytime soon, so the Focus could continue to stack up these awards.

Since the Hottest of SEMA awards were first introduced back in 2010, the show has given out a total of 28 “Hottest” awards and Ford has won 13 of them, with at least one award every year.