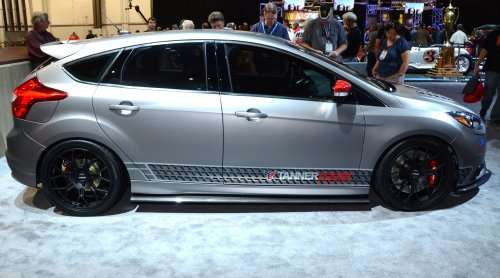 Ford Motor Company finished with a positive growth in December 2012 which helped to contribute to positive sales growth for the 2012 calendar year but thanks to an array of new models on sale now and more arriving over the next few months, 2013 could be a much stronger year for the Blue Oval crew.
Advertisement

December 2012 was a pretty so-so month for Ford Motor Company with the Lincoln brand posting negative growth and the Ford brand posting the lowest growth rate of those brands on the positive side of the ball. The good news is that with 206,838 vehicles sold last month, the Ford brand is the bestselling name in the US market. Things weren’t so great for Lincoln as the luxury arm of FoMoCo continued to struggle with a lineup that has grown a bit stale over the past year.

Overall, 2012 was a pretty good year for the Motor Company with the Ford brand being the only single brand in the US to top 2 million sales in 2012 – beating Toyota by nearly 300,000 units. Ford didn’t post a huge growth but their increase was enough to make them America’s bestselling brand for 2012. Not surprisingly, the Lincoln brand was among the worst in terms of growth for 2012, beating only Suzuki and Mitsubishi but with the company promising new Lincoln models soon – things should improve for the luxury brand in the coming year.

Ford
The Ford brand was the top brand of Ford Motor Company both in December 2012 and in the entire 2012 calendar year. With 206,838 vehicles sold last month, Ford easily outsold everyone else by at least 39,000 units although they posted a relatively low growth rate of just 2.5%. Ford was led in growth by the Focus that improved by 58.3% compared to the same month last year while the compact Fiesta was second with a jump of 52.8%. Jumping to the other end of the vehicle spectrum, the Ford Explorer was third in growth with an improvement of 20.4% over December 2011. In terms of sales volume, the Ford F Series was (and always is) the brand’s bestselling vehicle with 68,787 trucks sold last month. The Focus was second in sales with 22,604 sedan and hatchbacks sold while the new Escape overcome a handful of recalls to be the third bestselling Ford model in December 2012 with 20,131 units sold.

On the year, Ford sold 2,168,015 new cars, trucks, vans and SUVs for an increase of 5.1% over the previous year. The Ford brand was led in overall sales by the F Series pickup which sold a total of 645,316 – making the F Series the bestselling model in America. The compact Ford Escape was second in sales with 261,008 new models sold while the Focus was third with 245,922 vehicles sold and the Fusion was fourth with 241,263 units sold in 2012. In terms of annual growth, the Ford Focus led the way with a jump of 40% followed by the Mustang at 17.8% and the Explorer at 16.7%. We can expect things to be better for the Ford brand in 2013 thanks to the edition of the new C-Max along with the continued boom of the new Escape and Fusion.

Lincoln
Lincoln struggled in December 2012 much like the brand had on and off throughout the year, moving just 7,384 which brings about a decline in sales of 12.1% from December last year. The Lincoln MKT and Navigator were the only vehicles in the lineup to post positive growth last month with the MKT improving by 13.8% while the Navigator saw sales grow by 7.2%. In terms of volume, Lincoln’s December was led by the MKX with 2,617 units sold while the MKZ was second (1,630 sold) and the MKS (1,350 sold).

For the year, Lincoln was one of the worst brands in the US in terms of both sales and growth. Only Suzuki and Mitsubishi were worse than Lincoln in terms of growth while only Fiat, Mini, Volvo, Suzuki and Mitsubishi were worse than Lincoln in terms of annual sales volume. The biggest reason for the steep decline in overall brand sales from Lincoln was the demise of the popular Town Car which accounted for about 8,400 less units in 2012 than in 2011. If you remove the Town Car from the equation for both 2011 and 2012, the brand would have actually shown positive growth on the year. In terms of year to year growth, the top model from Lincoln was the MKT, which jumped up 41.2%. The MKX was second with a growth of 7.3% and the Navigator was third with an increase of 4.4%. In terms of sales volume, Lincoln was led by the MKZ with 28,053 sedans sold followed by the MKX (25,107 sold) and the MKS (12,524 sold). Things don’t look great for Lincoln right now but the company has promised new models in the future that should begin to hit sometime this year.

While Ford was technically the “weakest” of all automakers in terms of 2012 sales growth, that is due to the fact that Ford has remained more consistent over the past few years. Some of the automakers who posted huge growth rates in 2012 (Toyota, Honda) did so because of bad years in 2011 so Ford’s small growth relative to the rest of the industry in 2012 isnt so much a negative reflection on Ford as it is a sign of improvements made by the competition. Luckily, with models like the new Fusion, the C-Max, and the arrival of new Lincoln models down the road, Ford Motor Company stands to show much stronger numbers in 2013.