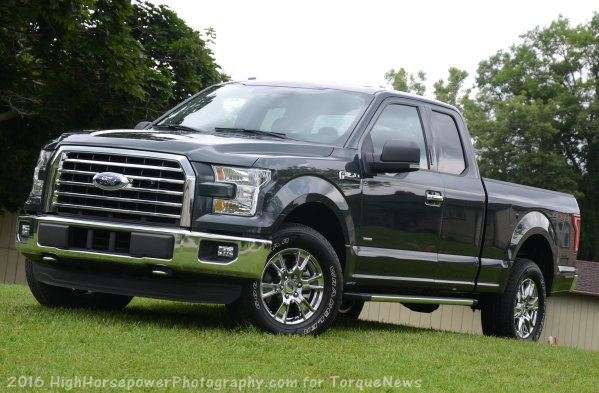 Ford Motor Company has announced that they will stop production of the new F150 pickups at their Kansas City Assembly Plant in order to improve the facilities production capacity – presumably preparing for what could be a big 2017 model year for the F150.
Advertisement

When the news first hit the internet that Ford would stop production at the Kansas City F150 plant for a week in early May, it was suggested that the break was to allow the dealerships to burn through excess stock. However, the Ford F Series moved more than 70,000 units over each of the past two months and the F150 is leading the way, so the Motor Company is definitely not having any issues moving the aluminum bodied pickup.

The truth is that the automaker has opted to move one of the scheduled retooling periods forward in an effort to address some issues in the F150 plant which have been slowing production. In other words, once the work being done at the Kansas City truck plant are complete, Ford will be able to produce even more new F150 pickups.

Kansas City Paint and Body Shop Bugs
Ford Motor Company hasn’t offered up any specific details, but the planned downtime starting on May 9th will be used to address some “bugs” in the paint and body shop. There has been no real information on what kind of bugs they are chasing, but once those issues have been addressed, the Kansas City plant will be able to produce the new F150 at an even greater rate.

This stoppage was originally scheduled for this fall as part of a standard model year retooling process, but with the new to address these issues with the paint and body shop, the company opted to use this planned downtime a few months early. I would expect that in addition to handling the paint and body shop issues, any retooling for the 2017 model year will also take place starting next week.

The 2017 F150
The 2017 Ford F150 could cause a spike in sales from the already lofty numbers, with almost 257k F Series trucks sold during the first four months of 2016. The 2017 F150 will be even better, with the addition of the high performance SVT Raptor and the new premium drivetrain, including a new EcoBoost V6 and the new 10-speed automatic transmission. The Raptor will be the most capable factory-built half ton truck ever, but even the “regular” 2017 F150 with the new 3.5L EcoBoost V6 mated to a 10-speed transmission should make the newest half ton Ford the best ever in terms of power, capabilities and efficiency.

Ford will almost certainly see a spike in F150 sales with the long-awaited rival of the new Raptor, but the revamped premium drivetrain will likely bring more customers into the dealership. When you add in the MPG-leading 2.7L EcoBoost and the rumored arrival of both a diesel and a hybrid version coming soon – the Kansas City plant could see a massive spike in demand over the next week.