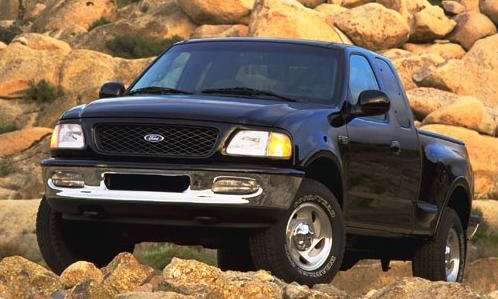 The National Highway Traffic Safety Administration has announced that their 2010 investigation of the Ford F150 for fuel tank strap failure issues has been expanded from the 1.4 million initially included to over 2.7 million.
Advertisement

The NHTSA hasn’t indicated exactly what caused the huge spike in 1997-2001 Ford F150 models included in the ongoing investigation, but the federal agency has announced that the scope of this fuel tank strap failure investigation has nearly doubled from their original estimate.

The investigation opened last September, after the NHTSA had received 32 complaints about the straps holding the fuel tank to the chassis rusted to the point of failure. Since then, that number has ballooned to 306 complaints made to both Ford and the NHTSA, causing the agency to expand their investigation. In 243 of the complaints, the fuel tank straps broke and the tank was dragging on the ground under the vehicle and in 95 cases, the dragging and impact caused fuel leakage. Recently, these strap failures have caused two vehicle fires – one of which totally destroyed the vehicle.

The fuel tank straps on the 1997-2001 Ford F150 are made of steel – like most vehicles. Unfortunately, it seems that these straps are wearing much more quickly than they should be, most likely due to excessive levels of corrosion (rust) and when one or both of them breaks, the only things holding the fuel tank in the truck are the fuel lines. This allows the tank to drop down to the ground and drag; along with putting extreme levels of stress on the fuel lines that aren’t designed to be load-bearing. When you are dragging a fuel tank filled with gasoline on the ground, creating damage to the tank and sparks – there is a massive risk of fire.

Considering the growth in the number of complaints over the past few months, the NHTSA could decide that these 2.7 Ford F150s need to be recalled. Luckily, fuel tank straps are fairly easy to replace for a dealership technician so should Ford need to call them back – the fix should be quick and easy. Also, if you own a 1997-2001 Ford F150 and are concerned with this problem, taking a good hard look at the entire length of your fuel tank straps should offer you an idea as to whether or not you should address the issue or not.

TorqueNews.com will bring you more information as it becomes available.

chip ball wrote on June 2, 2011 - 6:43pm Permalink
hello just saw this and my truck a 2001 f150 4x4 strap broke put big hole in tank this was yesterday 6-1-11 i work in winchester ky. live in huntington wv. had to bum ride back home last night truck still there lost a whole tank of fuel and at 4.00 gallon thats pretty pissy and 2 hours from home, had to order new tank and straps wont be in until sat morning thats means driving back down on day off, buying dads gas, time fixing it, filling my truck up because i lost all my gas,anybody with any responce ?
Anonymous wrote on July 12, 2011 - 12:11am Permalink
hi, i just seen that from an auto show and i was interested on how it will boost up the road. very nice. maybe i can be a <a href="http://www.automd.com/repair/ford_m19/f150_mm235/">Ford F-150 repair</a> mechanic.