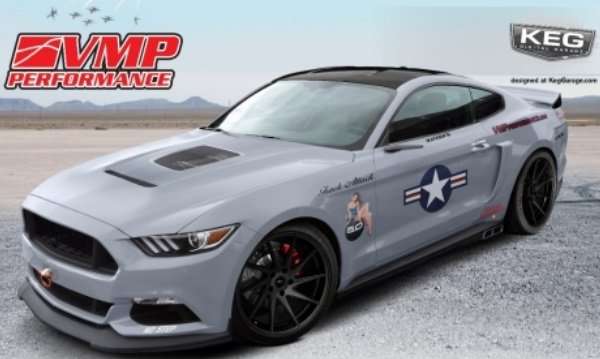 As part of the ongoing tease of their cars coming to SEMA, Ford Motor Company has shown off a pair of customized Mustang GT coupes fitted with superchargers, packing a unique look and an output in excess of 825 horsepower from the relatively lightly modified 5.0L V8.
Advertisement

We can expect that Ford Motor Company will have one of the biggest displays at the upcoming 2016 SEMA Show and leading up to the big Las Vegas convention, the Blue Oval crew has been teasing some of their customized vehicles with development sketches and simple mod lists. There have been a handful of Ford Mustang fastbacks and convertibles shown off, but today we are focused on two particular SEMA Show cars – those fitted with the 5.0L V8 and a supercharger.

I am focusing on the SEMA-ready Ford Mustang GTs because they are making monster power with a seemingly short mod list, showing how easily you can build up the 5.0L V8 to make enough power to battle even the most powerful production muscle cars – namely the Hellcat Challenger and the Camaro ZL1.

SEMA Mustang GT Teasers
First up, we have the 2017 Ford Mustang GT finished in the fighter jet-style livery shown above. This Mustang GT begins on the outside, where Cervini has added a new hood with a window in the middle, a new front splitter, side rockers with integrated exhaust and a low profile rear spoiler. This Mustang GT is painted grey to match a fighter jet and airbrushed with an array of old school fighter jet-style icons, but the look is the least exciting part of this car.

Under the hood, the 5.0L V8 of this Mustang GT has been fitted with a VMP Performance Gen II-R 2.3-liter TVS supercharger package, including a TwinJet 67mm throttle body, a dual fan heat exchanger and a fuel pump booster – along with long tube headers, a Cervini custom exhaust system and a unique engine tune. The result of this engine build is an output from 5.0L V8 which has risen from 435 horsepower and 400lb-ft of torque to 851 horsepower and 703lb-ft of torque.

This customized Ford Mustang GT also has a heavy duty clutch, a Roush 3-way adjustable coilover suspension setup and a brake kit with parts from Brembo and Baer. Finally, the power is put to the ground via a set of Michelin Pilot Sport Cup 2 tires measuring 305/30/19 up front and 315/30/19 out back.

The second Ford Mustang GT destined for the 2016 SEMA Show has been built by the folks at SpeedKore, who have added a lightweight carbon fiber body kit. In addition to the lightweight skin and the unique look, this Mustang GT has been fitted with a Whipple Stage 2 supercharger setup which, when tuned, lifts the output up to 825 horsepower. To handle that extra power, this Mustang GT features an Eibach coilover suspension kit, carbon ceramic brakes and Michelin Pilot Sport Cup 2 tires measuring 285/30/20 up front and 325/30/20 out back.

Each of these Mustang GT SEMA Show cars illustrate how simply owners of the 2015+ Ford Mustang GT can lift the output by adding a supercharger and a few supporting modifications – while also showcasing common upgrades like brake, suspension, interior and body bits.

Toyota vs Tesla: Which Stock To Buy These Days
For Some Former Daimler Managers Daimler Is Authority, While Tesla Is Like a Startup
END_OF_DOCUMENT_TOKEN_TO_BE_REPLACED