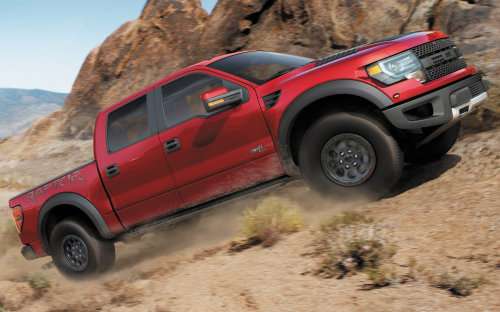 Ford Motor Company has just announced the 2014 F150 SVT Raptor Special Edition in response to requests by prospective customers who want a more exclusive version of the mighty Raptor pickup – adding new exclusive exterior paint options and new side graphics to the most capable factory offroad package on the road today.
Advertisement

The 2014 Ford F150 SVT Raptor Special Edition is an appearance package, coming in unique exterior tones of either Tuxedo Black or Ruby Red Metallic with new bedside graphics that are exclusive to the package with the Raptor and SVT logos printed in a sort of grey and black camouflage design. Considering that Tuxedo Black is a factory option for the current Raptor F150, I would suspect that many of the buyers of the Raptor Special Edition will opt for the unique deep metallic red. The new Raptor Special Edition shown in the image on the right shows the SVT beadlock wheels that were introduced for the 2013 Raptor but the 2014 model trucks look like they have a gun metal grey beadlock lip rather than the silver found on the current models.

On the inside, the 2014 Ford F150 SVT Raptor Special Edition comes with new sport seats with Brick Red bolsters with black inserts and cloth honeycomb highlights. Also, all of the features of the Raptor Luxury package are standard including a Sony sound system, HID headlamps, SYNC with MyFord Touch, remote start, a built in trailer brake package, a rear view camera and much more.

While the 2014 Ford F150 SVT Raptor Special Edition does not include any performance upgrades, this is an offroad performance truck that is already more capable than anything else in the segment. While Chrysler’s Ram Truck brand continues to ponder a Raptor-fighter based on their Mopar Ram Runner upgrade kit, there is really no half ton truck that will keep up with the Raptor in its natural offroad environment. That being said, the high performance Fox suspension system and the 411 horsepower 6.2L SVT V8 really don’t need to be upgraded as they work together to form the best factory offroading truck – possibly ever.

“Raptor owners are looking for a high-performing, uncompromising off-road pickup truck with the features and luxuries found in today’s premium trucks,” said Doug Scott, Ford truck group marketing manager. “Since its launch in 2009, we’ve continually moved Raptor forward in capability and design, and the 2014 Special Edition is the best Raptor yet.”

There is no mention of pricing in today’s online introduction of the 2014 Ford F150 SVT Raptor Special Edition but we can expect the MSRP to be somewhere above the $55,000 price tag of a loaded up 2013 Raptor. While the price may not be much above that $55k mark, the metallic red paint and decal package along is likely to increase the price by at least a couple hundred bucks over the standard Raptor finished in a paint code that doesn’t carry an upcharge. The release does not specify what body type the Raptor Special Edition will be offered with and that leads us to believe that it will be available with both the standard SuperCab and the larger SuperCrew, both of which come with a standard 5.5 inch bed.

Ford sold over 13,000 copies of the Ford F150 SVT Raptor during the 2012 calendar year and adding this new high end appearance package to the Raptor lineup may help entice possible buyers who want their Raptor to stand out even more from the standard Ford F150 pickup. We can expect the Special Edition Raptor F150 pickups to hit dealerships this fall.