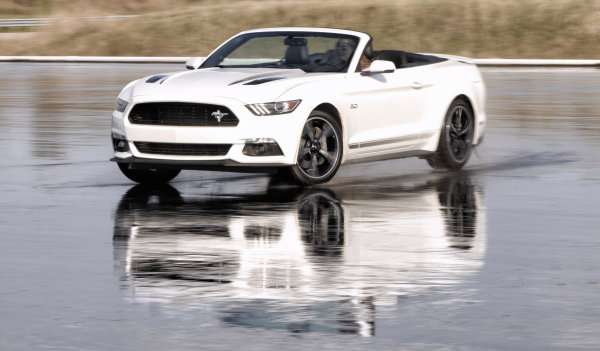 The 2015 Mustang has proven to be a huge success, but in order to keep the lineup fresh for the 2016 model year, Ford Motor Company has brought back the California Special package for the Mustang GT.
Advertisement

Some leaked dealership information a while back suggested that the California Special package would return for the 2016 Ford Mustang and today, that information has become official. This package will begin reaching dealerships later this year when the early 2016 models roll off of the assembly line and while no pricing has been discussed, we can expect the 2016 Mustang GT/CS to cost a bit more than a loaded Mustang GT Premium – because it is essentially an upfitted Mustang GT Premium with some unique appointments inside, outside and under the hood.

The 2016 Mustang GT California Special
After taking a model year off, the California Special package is back for the 2016 Ford Mustang. This package builds onto the Mustang GT Premium and while all of the images from Ford of the new GT/CS show it as a convertible, it is also available with the fastback models. Like all 2016 Mustang GT Premium models, the new GT/CS comes with all of the interior gadgets that you could want with the power of the 5.0L V8 – sending 435 horsepower and 400lb-ft of torque to the rear wheels by your choice of a 6-speed manual or 6-speed automatic transmission.

The unique features of the 2016 Ford Mustang GT California Special begin on the front end, where a large front splitter and a unique grille with the tri-bar pony logo give the face of the GT/CS a very different look from the other new Mustang GT models. Next, regardless of the vehicle color chosen, the 2016 Mustang GT/CS sports black painted exterior mirrors, black painted hood vents with new integrated turn signal indicators, 19 inch ebony painted wheels, a black stripe package on the hood and doors, a black pedestal spoiler, dark taillight accents and a faux rear gas cap with the GT California Special emblem. Again, we don’t know for sure how much the 2016 Ford Mustang GT California Special will cost, but we know that it will arrive this fall and when it does, we can expect some nostalgic buyers to snatch up this modern take on an old school package – leading to another possible boost in Mustang sales as Ford works to prevent Chevrolet from leading the performance car sales race for a 6th straight year.

Brigido Valenzuela wrote on March 7, 2018 - 12:13pm Permalink
For now just one question. My son bought a 2016 Ford Mustang GT California Special with the automatic 6 speed transmission. Since the transmission is automatic, what is the actual rearend gear? Is a 3.31, or 3.35, or 3.73?

LG's New EV Battery Plant Is a Welcome News for Tesla
Tesla Giga Berlin's New Hurdle: It's Not Only the Gov't, but Now Tesla Itself
END_OF_DOCUMENT_TOKEN_TO_BE_REPLACED