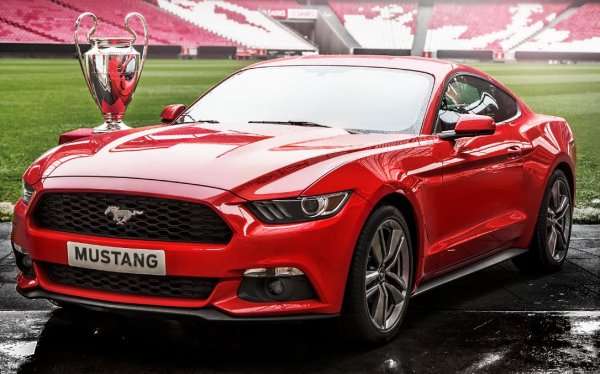 The First European 2015 Ford Mustangs Sell Out in 30 Seconds

This past weekend, the Ford of Europe officially began taking orders for the 2015 Ford Mustang for the European market at the UEFA Champions League Final game and with an incredible 9,300 people lining up – the first batch of Mustangs slated for sale across the pond sold out in less than 30 seconds.
Advertisement

The 2015 Ford Mustang is the first of the fabled pony cars that has been designed with the intention of being marketed in Europe and to attract as much attention as possible, the company worked out a deal with the Union of European Football Associations (UEFA) to prominently display the new Mustang at their Champions League Final in Lisbon, Portugal. This is one of the biggest vehicle launches in the history of Ford of Europe so it is fitting that the debut would be paired up with one of the biggest European sporting events of the year. In addition to the UEFA Champions League Final game being an excellent publicity and marketing opportunity, Ford Motor Company decided to use the big soccer game to officially begin taking orders for the 2015 Mustang from European customers.

While Ford Motor Company decided to offer attendees of the Champions League Final game a chance to be among the first people in Europe to order the 2015 Mustang, the automaker had a handful of interesting stipulations. First, only 500 units were available at the game. Second, those ordering a new Mustang at the game could only pick a Race Red Mustang fastback or a Magnetic Silver convertible – although buyers could pick from a host of options including their choice of either the 2.3L EcoBoost engine or the 5.0L V8 of the American Mustang GT. These cars will all include MyFord Touch with Sync and navigation, a black leather interior package with heating and cooled seats, park assist and 19 inch wheels. No pricing was announced for European buyers, but we can expect that their price will be quite a bit higher once you have calculated the exchange rate. You know…because it is a “foreign performance car”.

With a stadium capacity of almost 66,000, there was little doubt that Ford would get more than enough interest to snatch up the 500 available units of the 2015 Ford Mustang, but the interest was well beyond what many people would have guessed. According to Ford, roughly 9,300 people showed up with the hopes of ordering one of the 500 next generation Mustang fastbacks or convertibles. Roughly 30 seconds after the Ford of Europe representatives began taking order, all 500 units had been spoken for…leaving somewhere in the area of 8,800 soccer fans who had to head to their seats without having signed up for their next free car. That’s 500 cars ordered in 30 seconds.

"We knew there was huge excitement building for the new Ford Mustang coming to Europe, but the response during the UCL Final was overwhelming," said Roelant de Waard, VP of marketing, sales and service for Ford's European outfit. "It was a truly special way to kick off the Ford Mustang era in Europe."

By the way, the UEFA Champions League Final between Real Madrid and Atlético Madrid was won by Real Madrid by the score of 4-1. This was the organization’s 10th title.

There has not been a definite date as to when the 2015 Ford Mustang will begin reaching dealerships around the country, but based on the quick grab of the first 500 units – it looks like the new Mustang will flourish across the pond.