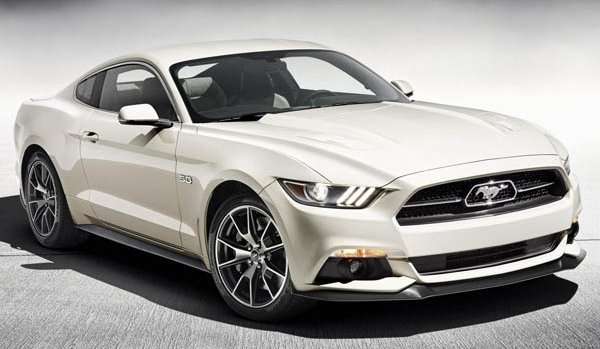 The final 2015 Ford Mustang built with the limited 50th Anniversary Edition package rolled across the stage at this past weekend’s Barrett Jackson Auto Auction and the winning bidder put up $170,000 for the right to own the final copy of the 50 year package – with the proceeds of the auction going to benefit the Edith and Benson Ford Heart & Vascular Institute.
Advertisement

The 2015 Ford Mustang marks the 50th full year of production for the fabled pony car. While the first Mustang was introduced in April 1964 and the first units sold to the public were part of the 1964 model year – 1965 was the first full year of production and sales for the mighty Mustang. To commemorate the golden anniversary of the Mustang, Ford has rolled out the next generation Mustang with a unique and limited 50th Anniversary package.

Although they are celebrating the 50th birthday of the mustang for 2015, the company used the initial model year – 1964 – to decide on how many examples of this 50th Anniversary package to build.

Not surprisingly, Ford saw a great deal of interest in these loaded up special edition 2015 Ford Mustang GT fastbacks so they reserved the very last 50th Anniversary Edition built for the Barrett Jackson Auto Auction to raise money for charity. The charity auction for 2015 Mustang 50th Anniversary Edition came this past weekend and a gentleman named Jack Fairchild posted the winning bid of $170,000.

The 2015 Ford Mustang 50th Anniversary Edition
Ford Motor Company wanted the 2015 Ford Mustang 50th Anniversary Edition to celebrate this incredible milestone with a car that showcased just how far the classic American pony car has come in the last 50 years. To do so, these 1,964 special Mustangs were fitted with literally every single option that can be ordered on the 2015 Mustang GT, along with some unique features such as the badging and the louvered glass quarter windows.

It should be noted that one of the most unique aspects of the 2015 Ford Mustang 50th Anniversary Edition is the availability of the GT Performance Pack with the automatic transmission, as that go-fast package is only offered with the manual transmission on “normal” 2015 Mustang fastbacks. "We're thrilled the No. 1,964 50 Years Limited Edition Mustang captured so much attention at the Barrett-Jackson Las Vegas auction," said Jim Owens, Ford Shelby, Boss and Mustang marketing manager. "Ford's long-standing relationship with Barrett-Jackson gives us the opportunity to benefit charities like the Edith and Benson Ford Heart & Vascular Institute through the sale of exciting and rare Ford vehicles. The 50 Years Limited Edition 2015 Mustang is no exception."

The Real Benefactor of this Auction
While Mr. Jack Fairchild came away from this past weekend’s Barrett Jackson Auto Auction will the final 2015 Ford Mustang GT built with the 50th Anniversary Edition package, the real winner of this auction is the Edith and Benson Ford Heart & Vascular Institute. This final 50th Mustang was auctioned as part of the Get Your Heart Racing program and while it was a no reserve auction, the final gavel sounded with a price that is more than three times the sticker price of this limited edition 2015 Mustang. "It's a privilege to benefit from the auction of such a spectacular automobile," said Sandy Hudson, chief development officer, Henry Ford Hospital. "Henry Ford Hospital and its Edith and Benson Ford Heart & Vascular Institute are grateful for our ongoing relationship with both Ford and Barrett-Jackson that has allowed us to raise incredible amounts of funding for the Get Your Heart Racing program."

In the past few years, Ford Motor Company has worked with Barrett Jackson to raise more than 6 million dollars for various charities around the country.