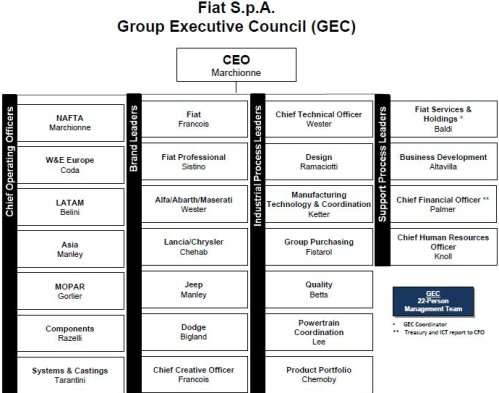 Fiat had moved one step closer to their official merger with the Chrysler Group as CEO Sergio Marchionne has unveiled his new managerial plan with includes a group of 22 management members who will form the "group executive council" – including 4 individuals who will head up the company’s efforts in the various geographic regions.
Advertisement

The 22 person group executive council, which reports directly to the board of directors, includes the four managers who will oversee Chrysler and Fiat operations around the world, starting with Mr. Marchionne himself serving as the head of operations for North America. Gianni Coda, so currently serves as the head of purchasing at Fiat, will oversee operations in Europe, Africa and the Middle East. Cledorvino Belini, the current head of Fiat in Brazil, will oversee South American operations and Jeep brand CEO Mike Manley will oversee Fiat and Chrysler operations in Asia. These new roles will take effect on September 1st although Marchionne has stated that there is no clear timeline thus far for the official merger of Fiat SpA and the Chrysler Group.

The Fiat SpA group executive council is broken up into 4 groups and 25 positions with company CEO Marchionne overseeing the whole shooting match. The first group is comprised of the Chief Operating Officers which begins with the four individuals mentioned above with their specific regions, along with the Mopar Group, Components Group and the Systems and Castings Group. Among this group, we find Pietro Gorlier, who serves as the CEO of the Mopar brand in North America.

Next is the Brand Leaders group, which is also divided into 7 categories. Among this group, we have Oliver Francois (CEO of the Chrysler brand in the US) who is overseeing both the Fiat brand while serving as the Chief Creative Officer. Chrysler/Lancia is represented in the council by Chrysler communications head Saad Chehab while Mike Manley will also serve as the rep for the Jeep brand alongside Dodge rep and current CEO Reid Bigland on the council of executives.

Click here for a complete rundown of the Group Executive Council of Fiat SpA.