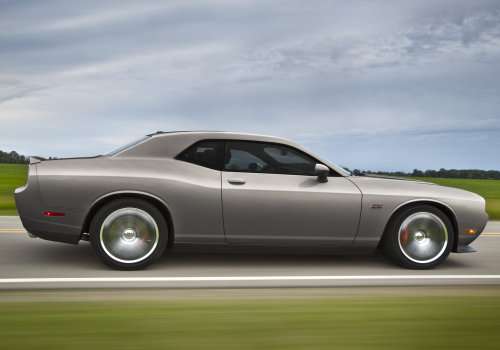 The Dodge Challenger SRT8 392 is a truly amazing muscle car but when the 2012 models hit showrooms later this year – the brawny street brawler will get even more impressive thanks to a few new additions including the suspension system and shift controls first seen on the Charger SRT8.
Advertisement

The 2012 Dodge Challenger SRT8 392 comes with a modest price increase of roughly $1,200 but with substantial improvements over an already-incredible modern muscle car – the price is well worth the additions.

First of all – and most importantly – the 2012 Dodge Challenger SRT8 392 features the dual mode adaptive damping suspension originally previewed on the upcoming Dodge Charger SRT8. This system features an Auto and Sport mode, which allow the driver to select just how stiff he or she wants the suspension to be while driving. In Auto mode, the car uses a variety of sensors to measure inputs like vehicle speed, steering angle, brake torque, throttle position and acceleration forces to instantly tune the suspension for the given condition. This means that when you are cruising out on the open road, the system adjusts to provide a smooth, comfortable ride but as your driving conditions change, the suspension can stiffen to provide a sportier grip. When the driver selects Sport mode, the adaptive damping suspension system locks the rebound and compression rate of the suspension to the higher level to provide optimum performance with less input from the system.

Next, the interior of the 2012 Dodge Challenger SRT8 392 benefits from a new heated steering wheel (for those who drive their 470hp Challenger in the snow?) featuring Chrysler’s awesome new paddle shifter system. Like the adaptive damping suspension, this paddle shift system made its world debut on the Dodge Charger SRT8 at the Chicago Auto Show and having experienced both Chrysler’s paddle shift system and the automatic-equipped Challenger SRT8 392 – this should make for an awesome improvement to the retro muscle car. The Challenger joins the Camaro in the world of steering wheel shifters but unlike the Chevrolet “buttons” on the back of the spokes of the Camaro, the Challenger will feature large aluminum shifters that wrap up between the spoke and the steering wheel itself. Paddle shifters are an awesome addition to automatic transmission models when done right …and Chrysler has done their paddle planning right.

Anonymous wrote on August 19, 2011 - 6:32pm Permalink
This is the first time I've heard of this dual mode adaptive damping suspension. Pretty interesting. I can also see the improvement of <a href="http://www.racepages.com/oem/dodge.html">dodge parts</a> especially in the interior part.