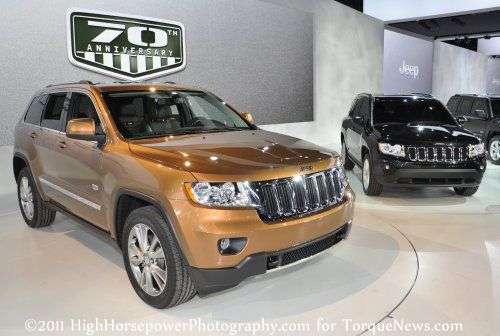 The good times continued for Chrysler in June, as the company led all major automakers in the US auto industry with a year-over-year growth of 30% - moving them into the third spot in vehicle sales for the month of June 2011 as they jumped over a still-struggling Toyota.
Advertisement

The Chrysler Group has come a long way since June 2010, when they were fifth in industry sales behind Ford, GM, Toyota and Honda but with the Japanese automakers still trying to get back on their feet after the natural disasters in March and the strong growth by Chrysler’s five brands; the company was able to move into third place overall behind only GM and Ford. Also, in moving into the third place spot in monthly sales with a powerful 30% growth rate compared to the same month last year, Chrysler was the strongest of all automotive groups operating in the United States.

Chrysler’s growth in June 2011 was led by the Jeep brand with an improvement of 74% over June 2010. The new Jeep Grand Cherokee and refreshed Jeep Compass (both shown on the right) were the leaders in sales growth, with the full-sized SUV improving by 208% while the compact Compass boomed – showing a 278% increase over last year. These were followed by the Patriot with 77%, the Liberty with 36% and the Wrangler with 27% growth rates compared to June 2010. The strongest model in terms of sales for Jeep was the Wrangler, with 11,290 vehicles making it not just the bestselling model for Jeep but with the exception of the Ram pickup – no other Chrysler Group model sold more units last month.

The group formerly known as Dodge trucks was next in line as the Ram Truck brand showed an improvement of 34% over last June. As is always the case, the Ram pickup was the top model from the brand that bears its name in terms of sales volume and growth. The Ram moved 21,362 trucks last month for an improvement of 35% over last year followed by the Dakota with 1,185 units accounting for a growth of 21%. The Ram Brand can expect to see numbers climb as the Ram C/V (a work vehicle based on the Dodge Caravan) is introduced followed by the replacement for the Dodge Dakota, also expected (at least to be unveiled) by the end of this year.

The Dodge brand was next in terms of growth with an overall improvement of 17% over last year and in moving 43,401 cars, vans and SUVs last month – Dodge was the Chrysler Group’s top dog in terms of sales volume. Over the past few months, the growth of the Dodge brand was helped tremendously by the popularity of the new Durango compared to the low numbers of the full sized SUV one year ago. Unfortunately, the Durango sold ZERO vehicles in June 2010 so there is no growth rate available for the new and vastly improved Durango in Jun 2011. However, with 5,827 SUVs sold last month, Dodge’s new Durango continues to show great results. The Dodge brand growth was led by the Caravan lineup with 10,822 units accounting for a growth rate of 25% over June last year and as the only Dodge model eclipsing the 10,000 vehicle mark, the Caravan was also the top seller for Dodge. The Nitro was next in terms of growth with 25% of its own and the refreshed Journey was third with an increase of 17% over the same month last year. After the Caravan, the next best model in terms of sales volume was the Charger with 7,215 units sold followed by the Durango and then the Avenger. The bad news for Dodge is that the Charger, Avenger and Caliber all saw negative growth last month and after spending time in both the 2011 Charger and the 2011 Avenger – it blows my mind that these models aren’t selling better.

The Chrysler brand was the Group’s “worst” branch in terms of growth with a decline of 8% compared to last year. The Town & Country minivan and the Chrysler 300 sedan both showed declines in sales compared to June 2010, along with 100% declines in sales from the non-gone Sebring and PT Cruiser. The one bright spot was the new Chrysler 200, which moved 7,219 vehicles last month, making it one of the automaker’s more successful brands in terms of volume.

Finally, the awesome little Fiat 500 continued on with its spread across the United States with 1,803 units sold in June 2011 bringing the “new” company to a total of 4,944 vehicles sold since being introduced earlier this year.

Other Chrysler News:
Chrysler loses lawsuit over Imported from Detroit slogan
Ram HD trucks get a new 6-speed transmission in 2012
The 2013 Dodge Caliber to be unveiled at 2012 Detroit Auto Show
Next Maserati supercar could feature Pentastar power
The 2012 Ram pickup to get Pentastar V6
Chrysler may sell the LA Motor Village

Kenny wrote on October 3, 2011 - 12:35pm Permalink
The reason behind the growth of Chrysler sales is the quality of their <a href="http://www.car-stuff.com/chryslerparts.htm">chrysler parts</a>. I've heard good reviews about the features and parts of their models.