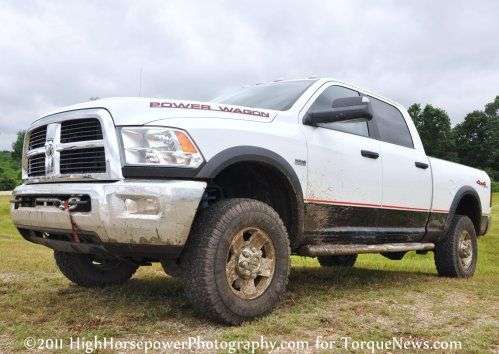 Ram HD trucks get a new 6-speed transmission in 2012

Chrysler has announced that when the 2012 Ram HD trucks hit the market later this year, they will feature a new optional 6-speed automatic transmission for models with the Cummins Turbo Diesel for those who don’t care for the standard 6-speed manual transmission.
Advertisement

When equipped with the 6.7L Cummins Turbo Diesel and the new 6-speed automatic transmission, the 2012 Ram 2500 and 3500 churns out 350 horsepower and an awesome 800lb-ft of torque at just 1,500rpm. When that drivetrain is fitted into the 2012 Ram 3500 with the Max Tow package, these trucks are capable of towing an incredible 22,750lbs – a bragging right that makes the Ram 3500 the best in class. Also, the Ram’s Cummin Turbo Diesel is able to reach these lofty numbers without the annoying hassle of using Diesel Exhaust Fluid – while still meeting emission standards in all 50 US states.

Chrysler used the announcement of this new automatic transmission to proclaim that the Ram Heavy Duty lineup has gotten more efficient with the addition of this new transmission but they do not mention how much of a difference it makes in overall fuel economy. We can expect those numbers to be revealed closer to the actual release dates but considering the fact that the diesel market is not dictated nearly as much as the gasoline segment, a few extra miles per gallon will come as more of a perk than a feature that buyers consider.

“Ram Heavy Duty truck owners need pulling power – 79 percent of them rate towing as extremely important. Reliability and engine performance are tied for second – named as extremely important by 73 percent of owners. 800 lb.-ft. of torque combined with Ram Truck’s unsurpassed 5-year, 100,000-mile powertrain warranty and Cummins’ proven reputation for reliability – are a direct response to our customers’ high expectations. We stand behind our commitment to build great trucks with best-in-class capabilities.”

The 2012 Ram HD lineup will also get a few additions here and there in the way of a blacked out grille and bumpers on certain trimlines, along with a new steering wheel with information center and AV system controls. In addition to the announcement of the new and standard features (click here for the whole press release from DodgeForum.com), Chrysler listed a few interesting statistics about Ram HD b buyers. It seems that 90% of them are men with an average age of 52 years old and an annual income of roughly, $99,000. 43% of Ram HD buyers graduated from college and 81% of buyers are married. These are fairly random statistics but interesting, nonetheless.

The Ram 2500 Power Wagon shown above will be back for 2012 but it will still exclusively feature the 5.7L Hemi, sending 383 horsepower to all four wheels via a 5-speed automatic transmission.

randythomas wrote on October 7, 2011 - 4:30pm Permalink
Too Many specs for 2012 upcoming <a href="http://www.stylintrucks.com/">trucks</a>! But the best part of it is the engineering is getting better and better. Although these gas guzzling behemoths consumes a lot of fuel the power of the engine makes all drivers go nuts with its speed and acceleration.
Don wrote on January 6, 2017 - 10:20am Permalink
I just bought a used 2012 Ram 3500 what is a few questions but I do like the truck it has a hundred and twenty nine thousand miles on it it seems to work good thank you
Ted Bonk wrote on June 29, 2018 - 10:18pm Permalink
I have a 1500 Hemi 2011 and I am having torque/trans problems. The trans is a 6 speed auto 74,000 K everything I read states they were 1st installed in 2012. Shouldn't Chrysler be responsible for my repairs?