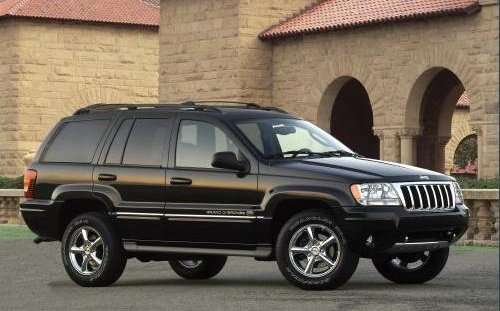 The Center for Auto Safety is demanding that the National Highway Traffic Safety Administration force the Chrysler Group to recall all Jeep Grand Cherokee models from the 1993 through 2004 model years – claiming that these vehicles post a significantly high risk of fire in the event of a rear-end collision.
Advertisement

Should the Center for Auto Safety (CAS) get its way, this Jeep Grand Cherokee recall could affect roughly 2.2 million vehicles but thus far, the NHTSA has declined comment on the topic – although the federal agency is looking into the situation. To support its case, the CAS submitted the results of their own independent tests to the NHTSA, allegedly showing that in the event of a violent rear end collision the fuel tank can rupture or the filler hoses can pull away from the tank; both of these situations would obviously increase the risk of fire. According to the CAS, there have been 55 deaths due to accidents in these vehicles where fire was “the most harmful factor”.

However, the folks at Chrysler have fired back, pointing out that these vehicles were submitted to tests more than three times as extreme as the government standard. Chrysler also points out that the 1993-2004 meets or exceeds all federal requirements, insisting that their popular SUVs are no more dangerous than any other vehicle of its type.

Chrysler revised the location of the fuel tank in the Jeep Grand Cherokee in 2005 – moving it from behind the rear differential to in front of it – thus protecting it a bit more in the event of a rear end collision. Chrysler claims that this move was made, not due to a safety concern but rather to make for increased cargo room.

You may be asking yourself, what is the Center for Auto Safety? Well, they are a group founded by Ralph Nader in 1970 and in a quick look around their website; it looks like they spend a great deal of time complaining about the insufficiencies of the government’s NHTSA. The CAS frequently insists that the NHTSA puts sales before safety and that the feds are not comprehensive enough. Interestingly, when I searched a few vehicles I do own or have owned in the past in their recall and information system – none of them were listed. However, when I searched those exact same vehicles on the NHTSA’s site safercar.gov, I found plenty of information that the Center for Auto Safety omits so it is a bit ironic that the CAS complains about the NHTSA while their own website is grossly out of date. Perhaps if they are so concerned about consumer safety, they should put more effort into bringing the information on their website up to date.

When you consider the fact that these vehicles went through the government crash test safety standard tests each year without any problem, it really makes you question whether this group is really trying to help the consumer or they are just fear-mongering to bring attention to their relatively unknown group. In any case, the National Highway Traffic Safety Administration is looking into the claims made by the CAS and we can expect a ruling once the feds decide whether or not these tests are legitimate.

Other Chrysler News:
Next Maserati supercar could feature Pentastar power
Next gen Chrysler minivan to offer AWD and a new crossover
Chrysler announces management changes along with SRT brand
The 2012 Ram pickup to get Pentastar V6
Chrysler may sell the LA Motor Village
Fiat offers Canadian govt $125 million for their final stake in Chrysler
Fiat to buy final US gov’t Chrysler stake for $560 million

Krystal Kid wrote on June 10, 2011 - 12:29pm Permalink
I got one of these from sparebumper.com to block the under-ride and shield the gas tank.
dorisscott wrote on June 11, 2011 - 7:51am Permalink
Consider dropping collision and/or comprehensive coverages on older cars. Search online for "Auto Insurance Clearance" If your car is worth less than 10 times the premium, purchasing the coverage may not be cost effective.