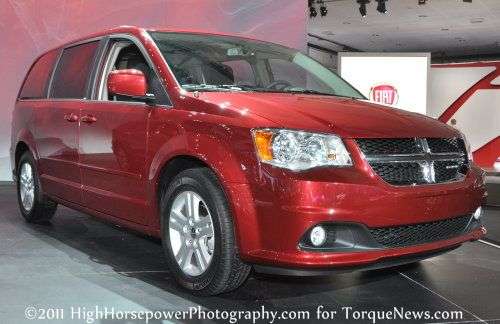 Next gen Chrysler minivan to offer AWD and a new crossover

According to Chrysler and Fiat CEO Sergio Marchionne, when the next generation Chrysler minivan hits the market it will feature the return of the popular all wheel drive system along with a new crossover variant – building on Marchionne’s comments at the 2011 Detroit Auto Show that one of the two top-selling minivans from Chrysler would be seeing a significant redesign in an effort to end inter-company redundancy.
Advertisement

Sergio Marchionne was quoted recently by the Detroit News as stating that the next generation Chrysler minivan platform needs to be more capable than the current models, which would include an all wheel drive system as well as a smaller “people mover” type vehicle. Marchionne first hinted to the changes in the Chrysler minivan lineup during a brief press conference at the 2011 Detroit Auto Show when he mentioned that the company had a need for a traditional minivan and a crossover type “people mover” – although he went into little detail about the future of the Chrysler and Dodge minivans.

All wheel drive was offered in Chrysler Group minivans until 2004, when the handy “stow and go” seating took up the under-vehicle room needed for the all wheel drive system. While AWD isn’t such a big deal for the minivan crowd it has become a mainstay in the crossover segment so if Chrysler plans to have the next generation minivan sharing a platform with a new minivan-based crossover, driving all four wheels is a must. Also, Chrysler is rumored to be working on a unibody pickup that will replace the Ram brand’s Dakota with the platform coming from the minivan family so AWD/4WD would be present there as well.

The new Chrysler Group has made a clear effort to do away with redundancy among their brands – modifying the look of vehicles like the Dodge Charger/Chrysler 300 and the Dodge Avenger/Chrysler 200 to make these vehicles appear different even though they share the same architecture and drivetrains. The Chrysler Town & Country and Dodge Caravan are - and have been – nearly identical since their introduction decades ago but Marchionne would like that to change. Chrysler is expected to pick the better selling of the two and have it solider on as the traditional model while converting the other into a vehicle of its own…rather than a rebadged version of the other.

This crossover people mover based on the next generation of the Chrysler minivan could be something similar to Ford’s Transit Connect; with a narrower stance and an overall smaller form. This makes the vehicle more acceptable for the European market while offering a distinct difference from the traditional minivan. These vehicles that are typically smaller in stature than a minivan but larger than a station wagon have become quite popular in Europe and with models like the Transit Connect selling well in the US – there appears to be a market for these compact people movers.

There is no indication as to when the next generation Chrysler minivan will hit the market but when it does, we can expect not just a new minivan with all wheel drive, but also a smaller crossover based on the minivan platform and the newest offering from the Ram brand in the form of a compact unibody pickup. We could see these new models as soon as next year, with the current Dakota slated to see production end this year. Also, the current deal between Chrysler and VW to build the Routan minivans ends in 2013 so that could be the point at which Chrysler rolls out their new minivan and crossover.

TorqueNews.com will bring you more news on this topic as it becomes available!

Other Chrysler News:
Chrysler announces management changes along with SRT brand
The 2012 Ram pickup to get Pentastar V6
Chrysler may sell the LA Motor Village
Fiat offers Canadian govt $125 million for their final stake in Chrysler
Fiat to buy final US gov’t Chrysler stake for $560 million
Chrysler leads the Big 3 in May 2011 growth