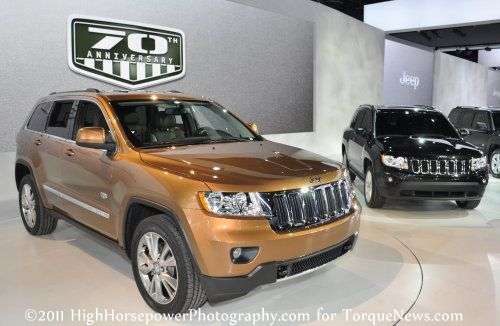 May 2011 was not a month of great sales as nearly every major automotive group showed a decline compared to May of 2010 but the Chrysler Group was among those showing growth – making them the only American manufacturer to show positive growth in May.
Advertisement

The Chrysler Group posted an overall growth of 10% in May 2011; trailing only the BMW Group and Jaguar/Land Rover in year-over-year growth. While their Dodge and Chrysler brands posted negative growth compared to May 2010, the Ram and Jeep brands helped pick the company up to show a better growth rather than either of their cross town Detroit rivals while the Fiat brand continues to grow as a part of the Chrysler Group. Also, with 115,363 vehicles sold, the Chrysler Group jumped to third in total sales behind only Ford and GM as Toyota struggled with the aftermath of the Japanese earthquake and tsunami.

The Chrysler Group’s top dog in terms of growth was the “trail rated” Jeep brand with a 55% improvement over May 2010. Growth from Jeep was lead by the 2011 Grand Cherokee with 9,484 SUVs accounting for a 192% gain over last year followed by the redesigned Jeep Compass (92%) and the Patriot (80%) as the company sport utes moved 4,555 and 5,470 units, respectively. The top mover in terms of sales units was the Wrangler with 10,008 models sold followed by the aforementioned Grand Cherokee.

Next in line was the Ram brand, as the vehicles formerly known as Dodge trucks posted sales of 21,467 for a year over year gain of 13%. As is generally the same, the Ram brand was lead in both sales units and growth by the mighty Ram pickup as the full sized truck sent out 20,117 units for a growth of 16% over last year. The only other model currently in the Ram brand lineup is the smaller Dakota pickup, which moved 1,350 units last month for a decrease of 16% over May 2010. The Ram brand can soon expect to see another model adding to their sales figures when the Dodge Grand Caravan-based Ram C/V (cargo van) hits the market later this year.

The Dodge brand was third in terms of growth, with a negative change of 5% during the month of May 2011 – although Dodge still sold more vehicles than any brand under the Chrysler Group halo. The leader in terms of growth for Dodge was the fully redesigned Durango, with the muscular new SUV presenting an improvement of 217,800% over last May. That is an incredible number, lessened by the fact that the company sold just 2 Durangos in 2010 but in any case the popularity of the 2011 Durango is a great sign for the company, with nearly 4,400 new SUVs sold last month. The top models in terms of sales from Dodge were the Caravan series with 9,427 units sold, followed by the Charger with 7,830 muscle sedans reaching consumers and the Avenger with 5,543 mid-sized sedans sold.
Next, the Chrysler brand rounded out the automotive group that bears its name with a negative growth of 21% in May 2011. Every returning vehicle from the previous model year showed a negative growth with the only real highlight being the popularity of the new Chrysler 200 sedan. This mid-sized sibling to the Dodge Avenger moved 7,098 units last month and while there is no number from last year to which we can compare for a direct growth figure, Chrysler sold just 2,789 Sebring sedans last year so the 200 is proving to be a welcome change from the old Sebring.

Finally, the Fiat brand continued to grow in their second full month of business with 1,759 examples of their compact 500 sold in May 2011.

Other Recent News:
Ford announces new 1.0L 3-cylinder engine and 8-speed transmission
Camaro leads in May 2011 as segment sales slow
The Nissan Leaf easily outsells the Chevy Volt in May 2011
Canadian government may sell remaining stake to Fiat
Fiat plans to buy last 6.6% of Chrysler from US govt