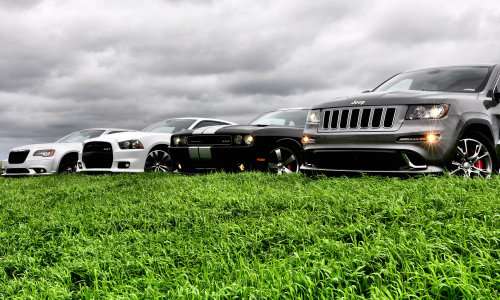 Over the past few months, the only product available from Chrysler’s newly formed SRT brand was the 2011 Dodge Challenger SRT8 392 but for the 2012 model year there will be 4 products in the lineup – with prices announced today for the high performance Dodge, Chrysler and Jeep models.
Advertisement

While all four vehicles from the 2012 SRT lineup with feature the same 392 cubic inch Hemi churning out 470 horsepower, there is a pretty fair sized spread in the price range for the SRT models. The least expensive of the 2012 SRT lineup is the Dodge Challenger SRT8 392, which carries a starting price of $44,820 including the $825 destination fee. This price is for a manual transmission model and based on 2011 pricing, we can expect the automatic option to cost somewhere in the area of $1,000 as that was roughly what it would set you back for the current models. However, it could cost more for the auto option thanks to the addition of Chrysler’s new paddle shift system but having experienced that shifting system already – it is worth every cent for those opting for the self-shifting models. Also, even though the 6.4L Hemi offers an impressive fuel economy rating of 23mpg, it is still subject to gas guzzler tax; $1,000 for the manual transmission models and $1,300 for the automatic Challengers. Overall, the 2012 Challenger SRT models see a slight increase in base price but with added features like the dual mode suspension system, you are getting a lot for your money.

Next in line as far as pricing is the 2012 Dodge Charger SRT8, which starts at $46,620 (including destination). The 2012 Charger SRT8 still will not come with a manual transmission option but the inclusion of the paddle shifters with the standard automatic transmission add more “fun to drive” factor in the absence of a clutch pedal. While it has not been stated, we can expect the Charger to be hit with similar gas guzzler taxes as the Challenger – and the rest of the 2012 SRT brand lineup.

The 2012 Chrysler 300C SRT8 is the next in line in terms of pricing, with the luxury high performance sedan carrying a starting price of $47,995. The 300C SRT8 will pack the same high horsepower 392 cubic inch Hemi, along with the automatic transmission as the other SRT cars but with the addition of more luxurious appointments comes a modest increase in price over the Charger.

Finally, the most expensive model in the 2012 SRT lineup is the Jeep Grand Cherokee SRT8. With 470 horsepower and 465lb-ft of torque, this 4WD super-sport utility vehicle offers more capabilities than any of the other SRT models – but that comes with at a premium price. The 2012 Grand Cherokee SRT8 starts at $55,295, including destination fees but not including any applicable gas guzzler fees.

The folks at the newly formed SRT brand, lead by former Dodge brand CEO Ralph Gilles, will get a fifth model in the lineup in the late spring or early summer of 2012 when Dodge introduces the 2013 Dodge Viper. While little information has been offered on the next American supercar, we can expect that it will have the same impact on the industry next year that it had when originally introduced in the early 90s.

Check out the gallery below for a look at the 2012 SRT brand vehicles along with the video below featuring SRT brand CEO, Ralph Gilles.