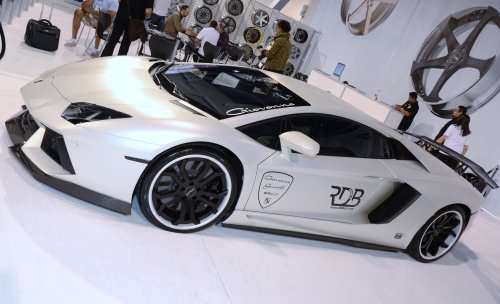 We have known for some time that Lamborghini will build their fastest supercar ever to celebrate the company’s 50th birthday but new information suggests that this new supercar will debut earlier than expected at the 2013 Geneva Motor Show – and more than one unit will be built.
Advertisement

This summer, Lamborghini will hold the Grande Giro Lamborghini - a cross country tour through Europe featuring hundreds of privately owned Lamborghini models but as a special surprise, the tour will also feature a new supercar to celebrate the company’s 50th birthday. This car is expected to be the highest performance Lamborghini of all time and when company Chief Executive Officer Stephan Winkelmann first talked about this new supercar last year, he said that it would be a one-off affair. He also stated that it would not be a retro model (so new new Miura) and it would not be a revival of a previous model (which means no new Diablo or Countach). That would lead us to believe that the special 50th anniversary supercar would stay in the possession of the company as a show car but a new report suggests that there will be more than one example of this new super-Lambo – and it will debut well before the Grande Giro Lamborghini in May.

While speaking at the American launch of the Lamborghini Aventador Roadster in Miami, Lamborghini design director Filippo Perini stated that the company would be coming to the 2013 Geneva Motor Show with a special low production vehicle that will be the fastest Lamborghini ever. Sure, this could be a different car than Stephan Winkelmann first teased in December 2012 but based on the very minimal details – low production, the fastest Lamborghini ever – it sure sounds like Winkelmann and Perini are discussing the same supercar. However, it seems as though the company will not wait until May for the Grande Giro Lamborghini…instead using the upcoming Geneva Motor Show in March as the grand stage for the launch of this super-supercar.

The bad news is that like many Lamborghini ultra high performance models like the Reventon, the Reventon Roadster and the Sesto Elemento, the mysterious 50th anniversary supercar will see production limited to very low production while carrying a very high price tag. Perini stated that less than 10 examples would be produced and most of them have already been sold. Looking at the pricing of previous limited production Lamborghini models offered over the past few years, we can expect that this rare Italian sports car will carry a price above that of the $2.6 million Sesto Elemento.

Speaking of the Lamborghini Sesto Elemento, that track-only monster would seemingly be the benchmark vehicle against which all other Lamborghini models would be compared so if the 50th anniversary celebration car is really going to be the fastest ever from the Italian supercar builder, it will have to best the Sesto. That carbon fiber work of automotive art is powered by the same 5.2L V10 drivetrain as the Gallardo with 562 horsepower and 398lb-ft of torque channeled to all four wheels via a 6-speed automated manual transmission and an advanced all wheel drive system. More importantly, the Sesto Elemento weighs just 2,200 pounds so the “stock” drivetrain from the Gallardo gives the Sesto a power to weight ratio of just 3.91 pounds per horsepower. That seems like a hard figure to beat with a street legal model (provided that the 50th anniversary car is street legal) but if the company was to call upon the 700 horsepower V12 from the Lamborghini Aventador, they could build a car that weighs over 2,700 pounds and still match the power to weight ratio of the Sesto Elemento. That weight figure seems much more reasonable so the company shouldn’t have too hard of a time designing a road going supercar powered by the Aventador’s V12 drivetrain that will outrun the ultra lightweight Sesto Elemento.

The 2012 Geneva Motor Show is about a month away right now so it wont be long before we have a much clearer idea of what Lamborghini has planned to celebrate their 50th year of building some of the world’s finest sports cars.

Click here for the teaser video of the special Lamborghini 50th anniversary car that was issued in early January.