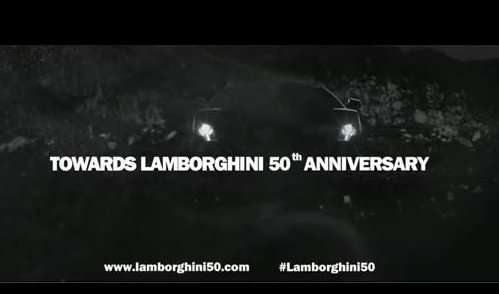 The people at Lamborghini have discussed how they have big things in plan to celebrate the company’s 50th birthday this year and their recent offering is a video history lesson featuring a wide range of past models in action but at the very end of the video, there is a shadowy vehicle that we presume is either the replacement for the Gallardo or perhaps the unique supercar that the company plans to introduce for their 50th anniversary.
Advertisement

This new video on YouTube is simply named “Lamborghini 50th Anniversary” and after proclaiming that the company has achieved 100 years of innovation in half the time, this 72 second video offers us a look at some of the vehicles that have made this Italian supercar builder one of the most well known source for high performance cars in the world. Included in the video is a shot of the assembly line of the incredible Lamborghini Miura followed by a video of the current Aventador assembly line in action. From there, we have about 45 seconds of video footage showing Lamborghini cars in action featuring names like the 350 GT (Lamborghini’s first production car), the Countach, the Diablo, the Aventador, the Aventador J, the Murciélago, the Reventon and a bunch of Gallardo models both in street and race form – even the upcoming Lamborghini Urus sport utility vehicle makes an appearance. For lovers of high performance cars, this video is a great, quick look at the history of the Lamborghini brand over the past 50 years but where this short video really gets juicy is during the last 9 seconds of the video.

As the Lamborghini 50th Anniversary video draws to a close, the words “Towards Lamborghini 50th Anniversary” and emblazoned across the screen and as the background lighting slowly brightens, we see an unknown supercar sitting in the shadows (as shown above on the right). Based on the location of the headlights being so close to the outer edge of the front fenders, it seems clear that this car is definitely not the current Lamborghini Gallardo or Aventador as both of those models have more room between the headlights and the edge of the fenders when looking straight on. While the headlight design of the mystery car appears to be somewhat similar to the current Gallardo, the spacing to the fender edge and the shape of the front end appears to differ from the Gallardo. So what is this mystery Lamborghini, you ask?

There are two likely possibilities as to what Lamborghini we are looking at during the final seconds of the new 50th anniversary video. This car is either the replacement for the Gallardo which is slated to arrive soon possibly under the name Cabrera as it is a known fact that there is a new “entry level” Lambo coming to complete the refresh of the small company lineup. The other possibility is that this is our first look at the one-off supercar that the company is planning to unveil during the Grande Giro Lamborghini cross-Italy tour in May. Little is known about this new Lamborghini that will very likely set the bar for the ultra high performance sports car segment but company boss Stephan Winkelmann commented that the 50th anniversary car would not be a revival or a retro vehicle. This means that the one-off Lamborghini built to celebrate the company’s golden anniversary will likely be an all-new model that I expect will be the most powerful and best performing Lamborghini of all time.

Unfortunately, we will all have to wait until mid May to find out just what Lamborghini has in store for their 50th anniversary celebration but with auto show season upon us – we should know more over the next few months leading up to the debut of the new supercar. Click here for more on that one-off supercar and check out the video below courtesy of the Lamborghini YouTube account. After watching the video, tell us in the comment area below what you think this mystery car could be.