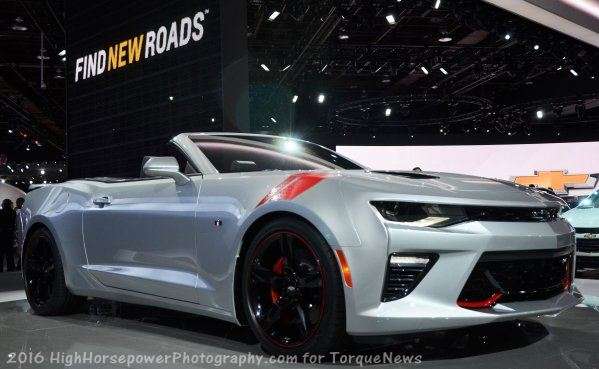 Every 2016 Chevrolet Camaro sold with a V8 engine has a warranty that covers problems occurring during track action and unlike the 5th gen warranty program that covered only the Z28 and ZL1 models, the 2016 Camaro SS and 1LE are also included – although only in stock form.
Advertisement

2016 Camaro On-Track Warranty
The folks at Motor Authority recently sat down with Camaro Chief Engineer Al Oppenheiser and spoke with him about the on-track warranty coverage for the 2016 Camaro. If you have a 2016 Camaro SS and you want to hit up the local drag strip or road course for test-n-tune or open track days, any mechanical failures which occur on the track are covered under warranty. This is technically for “testing” purposes and not for competition, so if you were running stock eliminator at your local drag strip all season and you blow an engine, they might try to decline your warranty claim. However, if you like to hit the drag strip a couple of times a year to see how quickly you can get your new Camaro SS down the quarter mile and on the third trip the engine blows – it is covered under warranty.

The new Camaro 1LE is also included, so if you buy a new 1LE and run into transmission troubles while having some fun at open track day at the local road course, it should also be covered under warranty.

Of course, there are some stipulations on the 2016-2017 Camaro on-track warranty coverage. Most notably, the car has to be factory stock. It is unclear whether things like sticky tires or better brake pads will void the warranty, but in speaking with Motor Authority, Oppenheiser specifically mentioned ECU tunes – so those are likely to hurt your warranty claim.

The good news is that if you have a 2016 Chevrolet Camaro SS or if you are waiting on a 2017 Camaro 1LE, the vast majority of problems that you might run into on the track will be covered if the car is 100% stock. With this in mind, we will hopefully see lots of 2016 Camaro SS owners taking their cars to the track, as the quickest stock Camaro SS is protected by the factory warranty.

Finally, we can expect that when the 2017 Camaro ZL1 arrives – and when the Camaro Z28 arrives – they will both be covered under similar warranties in stock form.

Why No V6 Models?
The 2016 Chevrolet Camaro V6 model is arguably the best-performing V6 muscle car ever, so you might wonder why it is not included in the on-track warranty program. Due to the fact that the Camaro in 1LT and 2LT form doesn’t have the same high performance cooling components or the same heavy duty braking components, they aren’t tested to the same extreme level as the Camaro SS and the other V8 models.

This is a bummer for those folks who bought the new 2016 Camaro with the V6 models, as any damage which occurs on the track with the 335hp models – or the new turbocharged 4-cylinder models – will not be covered…but I expect that we will still see plenty of them on the track over the next few years.

Maybe the 2016 Camaro should have its own slogan – Find New Racetracks.