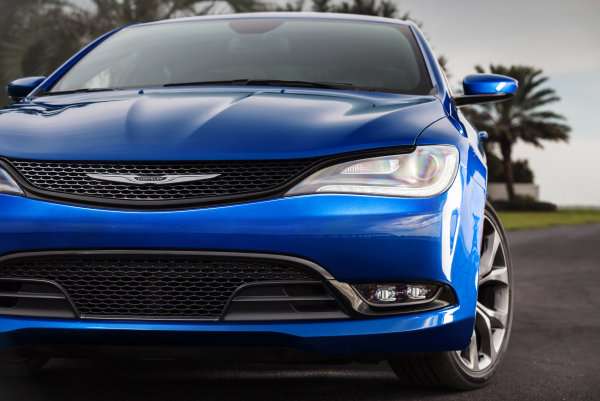 The 2015 Chrysler 200 will have a long list of features that will help it stand out in a very competitive midsized sedan segment, but the incredible drivetrain lineup is what will really help the next generation 200 blow away the competition.
Advertisement

When the engineering team responsible for the 2015 Chrysler 200 began to work on the drivetrain options of the new midsized sedan, they had a variety of features that they wanted to implement that would allow the new 200 to have a comparative advantage over pretty much every car in the segment. They wanted to offer incredible fuel economy, class leading power, a sure-footed all wheel drive system and a suspension setup that provided both a smooth ride and an inspiring driving experience. Fortunately, advancements in Chrysler brand’s engine program, an industry exclusive transmission, one of the most advanced all wheel drive systems sold in America, a sport tuned suspension package and one of the most functional Sport modes in the industry have allowed the engineering crew to make the 2015 Chrysler 200 everything that they had hoped.

First off, the 2015 Chrysler 200 will feature a pair of newish engines that will make this one of the most efficient options in the midsized segment while also being the most powerful. The standard engine across the entire 2015 200 lineup is the new 2.4L MultiAir Tigershark 4-cylinder engine that was introduced under the hood of the Dart GT. This mill sends 184 horsepower and 173lb-ft of torque to the wheels, putting it in the middle of the segment in terms of power output. More importantly, this engine is expected to offer at least 35 miles per gallon on the highway when the official EPA fuel economy figures are announced.

The image above is part of the company’s Unlock the 200 scavenger hunt in which you can win a two year lease of the 2015 Chrysler 200 and big cash prizes. Click the image to learn more about the contest!

The optional engine for the 2015 200 is the 3.6L Pentastar V6 that was featured in the current Chrysler 200 but for the next generation, Chrysler has bumped the power to 295 horsepower and 262lb-ft of torque – making it the most powerful option in the class. This engine isn’t new, as it has been used for the past few years in almost every Chrysler Group vehicle from the Dodge Grand Caravan to the Jeep Grand Cherokee to the Ram 1500, but the version found under the hood of the 2015 200 is the most powerful iteration of the Pentastar V6 that we have seen outside of the Dodge Challenger. 295 horsepower makes the new 200 more powerful than any of the competitors in the segment while still offering a very respectable 31 miles per gallon on the highway.

Next up is the new 9-speed automatic transmission that helps to make the 2015 Chrysler 200 more efficient while also making it so much fun to drive. The advantage of a transmission with so many gears is that the engineers can make the lower numbered gears more aggressive for vastly improved acceleration while the higher numbered gears are geared very non-aggressively to keep the RPMs down at cruising speeds – all with very subtle gear changes thanks to the close ratios from gear to gear. This 9-speed automatic transmission is the first 9-speed gearbox in the segment and one of the very first in the industry. Best of all, this high tech transmission is standard across the entire 2015 Chrysler 200 lineup.

One of the most unique drivetrain features of the 2015 Chrysler 200 is the advanced all wheel drive system. This AWD system has the obvious advantage of incredible traction in rough weather conditions while some high tech components allow the company to do away with the few downsides of all wheel drive. The 200’s all wheel drive system is fully disconnecting, which means that when the system recognizes that power isn’t needed at all four wheels, power to the rear wheels is cut to improve fuel economy. The changed from two wheel drive to four wheel drive is seamless and requires no driver input at all while a torque vectoring feature allows the all wheel drive system to adjust the amount of power sent to the front and rear wheels with a maximum output of 60% being sent to the rear wheels. This is the most technically advanced AWD system in the class and it should go a long way in making the 200 more capable in the winter and a whole lot more fun to drive hard in the summer.

Finally, the 2015 Chrysler 200 engineering team wanted to make sure that this luxury midsized sedan offered a high quality sporty feel so they have equipped the new 200 with a sport suspension and a standard Sport Mode system for the 200S and 200C V6 models. The Sport Suspension setup should offer the driver impressive handling attributes across a variety of driving situations, but since the 200 is from a luxury brand I would expect that this Sport Suspension system combines great handling characteristics with a smooth, comfortable ride. Those buyers who opt for the 2015 200S or the 2015 200C with the Pentastar V6 will enjoy the Sport Mode, which adjusts the steering system, the throttle sharpness, the shift points of the transmission, the torque balance of the all wheel drive system, the function of the electronic stability control (ESC) and the Adaptive Cruise Control. This is the most advanced sport mode offered in a midsized sedan and it will certainly go a long way in making the new 200 a more exhilarating car to drive hard.

The 2015 Chrysler 200 should very easily be the best midsized car from the Chrysler Group yet and aside from the gorgeous interior and the loaded exterior – the drivetrain lineup should give the next generation 200 a huge advantage over the competition.

Click here to check out our first drive review of the 2015 Chrysler 200C!