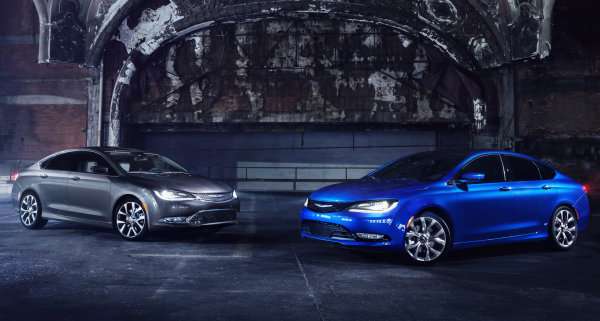 The official fuel economy figures for the 2015 Chrysler 200 have been announced and while they are still a touch lower than the real world figures I experienced while driving, the full spread of fuel economy numbers are good enough for the next generation 200 to rival the bestselling cars in the segment – including the Ford Fusion and the Toyota Camry.
Advertisement

The 2015 Chrysler 200 is offered with three different drivetrains – a 2.4L TigerShark 4-cylinder with a 9-speed automatic transmission and front wheel drive, a 3.6L Pentastar V6 with a 9-speed automatic transmission and front wheel drive and the top of the line 3.6L Pentastar V6 with the 9-speed gearbox and all wheel drive. While the new 200 doesn’t lead the segment in every fuel economy metric, the new midsized Chrysler bests some of the biggest names in the segment and it is towards the top of the segment in every category – while also being the most powerful car in the segment. There are plenty of cars in the midsized sedan segment that offer solid performance or great fuel economy; the new Chrysler 200 has both.

First off, we learned yesterday that the 2015 Chrysler 200 with the Pentastar V6 and All Wheel Drive will get an EPA estimated 18 miles per gallon around town, 29 on the highway and 22mpg combined. These “official” numbers are a bit below the top of the line AWD Ford Fusion, but the 200 V6 AWD offers significantly more power and when compared to the Lincoln MKZ V6 AWD, the new 200 is more efficient on the highway and in the combined category. The Camry is not available with all wheel drive.

When you take that powerful Pentastar V6 engine in install it in a 2015 Chrysler 200 with the standard front wheel drive system, the fuel economy figures only jump by 1 mile per gallon in the city and combined, but highway fuel economy rises to 32mpg (19 city, 32 highway, 23 combined). The Toyota Camry with a V6 and front wheel drive only offers 31mpg on the highway, but the Camry offers an advantage around town with 21mpg. The Ford Fusion 2.0T front wheel drive model offers better fuel economy in every category with 22 city, 33 highway and 26 combined but, as mentioned, the Fusion also has 55 less horsepower in its most powerful form.

Finally, the “base” 2015 Chrysler 200 drivetrain is the 2.4L Tigershark 4-cylinder that serves as the premium engine in the current Dodge Dart. Like the Dart, the 200’s 2.4L mill makes 184 horsepower and 173lb-ft of torque and, thanks to the 9-speed automatic transmission – this engine has received official fuel economy ratings of 23mpg in the city, 36 on the highway and 28mpg combined. The Toyota Camry with the base 4-cylinder engine offers the same 28mpg combined, but the Camry has a slight advantage in the city at 25mpg along with a slight disadvantage on the highway at 35mpg. The base model Ford Fusion comes with a 2.5L 4-cylinder engine that yields 22mpg in the city, 34 on the highway and 26mpg combined – giving the new base 200 a significant advantage across the board. It should be noted that while the Chrysler 200 and Toyota Camry have only two engines, Ford offers two midlevel 4-cylinder EcoBoost engines that offer better fuel economy than the base 4-cylinder but for the sake of consistency, I’ve compared base engine to base engine. The base 4-cylinder engine in the 2015 200 is also more powerful than the base engines in both the Camry and Fusion.

“With fuel economy ratings of up to 36 miles per gallon and features typically found on more expensive luxury vehicles, the all-new 2015 Chrysler 200 delivers the premium features customers want at a price they can afford,” said Al Gardner, President and CEO — Chrysler Brand, Chrysler Group LLC. “With a standard nine-speed transmission, state-of-the art available all-wheel drive, a choice of two powertrains and interior that will wow drivers and passengers alike, the new Chrysler 200 is raising the bar for what customers should expect from a mid-size sedan.”

The 2015 Chrysler 200 will arrive later this year and when it does, it will give the Chrysler Group its strongest contender in the popular midsized sedan segment in the modern auto industry. While it isnt realistic to expect the new 200 to swoop in and unseat the Toyota Camry as the bestselling car in the country or the Ford Fusion as the bestselling American car, having this high quality, competitive new 200 in the Chrysler lineup should go a long way in helping the smallest of the Detroit Big 3 to continue its four year growth pattern.