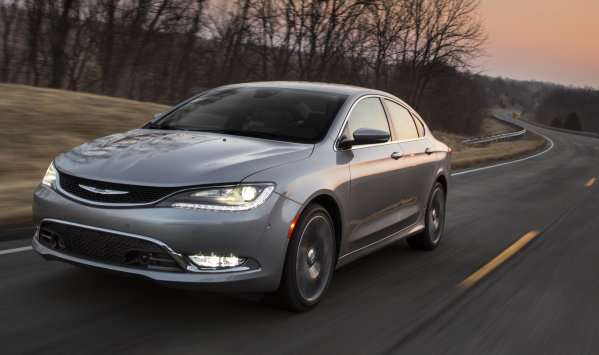 When the 2015 Chrysler 200C was introduced earlier this year at the North American International Auto Show in Detroit, it was clear to pretty much everyone that this new midsized sedan looked the part of a major contender in the industry’s most popular segment but would the new 200 drive as great as it looks?
Advertisement

Last week I had the pleasure of spending a few hours behind the wheel of a 2015 Chrysler 200C V6 AWD to see if this new car could compete with some of the biggest names in the American auto industry. Many of the industry’s top selling models such as the Toyota Camry, the Ford Fusion and the Honda Accord comprise the midsized sedan segment and in past year, the Chrysler Group has struggled to build a car that could really compete with those big names. The Chrysler Sebring and Dodge Avenger did an admirable job of giving Chrysler fans something solid in the midsized segment, but sales numbers of the Toyota and Ford models dwarfed the two midsized Chrysler sedans. The company’s midsized program took a big step forward when the Chrysler Sebring became the Chrysler 200, but that car was really just a nicer version of the Sebring. That all changed when the 2015 Chrysler 200 was introduced in Detroit as it is an all-new car from top to bottom, inside and out. The new 200 has a gorgeous exterior design that is unlike anything else in the company lineup with smooth, flowing lines, a very upscale looking trim layout and a high tech lighting design that makes for one of the best looking models in the midsized sedan segment. Better yet, the cabin of the new 200 looks more like something out of a European luxury car than an affordable midsized American sedan with every bit of modern interior technology that you could ask for nestled among plush, comfortable seating for five. The new 200 has the look and feel of a luxury car while having the price of some of the highest volume cars in the US industry, but the biggest test for the 2015 Chrysler 200 comes on the open road. Neither the Chrysler Sebring nor the current (2014) Chrysler 200 were bad cars to drive, but neither of them were particularly inspiring cars. The 3.6L Pentastar V6 went a long way in making the current 200 a far more engaging vehicle, but it still wasn’t a car that a great many people would call sporty. With the 2015 200, the Chrysler engineers obviously put a great deal of effort into making this new midsized sedan sportier to drive…and their efforts are very well received. My test drive car was a 2015 Chrysler 200C with the 3.6L Pentastar V6, the standard 9-speed automatic transmission and the advanced all wheel drive system. The 295 horsepower V6 makes the 2015 200 the most powerful car in the segment and the new 200 is the only car sold in America with the fuel-friendly 9-speed automatic while also being one of the few cars in the segment to offer all wheel drive. On paper, the 2015 Chrysler 200 reads like a car that is going to be a whole lot of fun to drive…and seat time in this new sedan does not disappoint.

The Drive
As soon as I pulled the 2015 Chrysler 200C out onto the road from the parking area, I ran into a red light on a long, straight road which was surprisingly desolate. When that light turned green, I hit the throttle hard and instantly the 200 was accelerating hard with the advanced all wheel drive system allowing me to make use of all 295 ponies without any hesitation or traction issues. The 9-speed automatic transmission features aggressive gearing across the first few speeds and that translates to a really impressive level of acceleration. This car pulls hard from a stop and while I found that the front wheel drive model is a little more likely to spin the tires – the AWD Chrysler 200 lets you launch literally as hard as you want. The launch power puts you back hard into the driver’s seat and the quick, crisp shifts of the 9-speed transmission bring you quickly to speeds that push most local speed limits. Not only does the fact that the 200 have 9 gears allow for aggressive low end gearing, but it also allows for smaller jumps between gears and that helps to keep the 3.6L Pentastar V6 right in the sweet spot of the powerband. The 200 rips away from a stop hard enough to put a smile on your face and leave your passengers grabbing onto the door panels with surprise. Thanks to the advanced all wheel drive system, the 200 can send as much as 60% of the power to the rear wheels and, as promised by Chrysler reps, the new 200 really does feel like a rear wheel drive car when launching hard from a stop and when driving the car hard in the Sport Mode. As my drive time continued, I got a few chances to launch the 2015 Chrysler 200C while shifting with the paddle mounted shift paddles. Chrysler originally introduced these shift paddles in their high performance SRT products so it should come as no surprise that the paddle shifting system is a very good one that affords the driver very precise control of the shifts – whether upshifting or downshifting. I found that the paddle shifters are especially nice when hammering through a series of tight, medium speed turns where being able to shift without taking my hands off of the wheel made for a far sportier driving experience much like what you get with the Dodge Charger SRT…but with a couple hundred less horsepower.

Speaking of cutting through tight turns, the 2015 Chrysler 200C features a sport tuned suspension system and a Sport Mode which adjusts a long list of vehicle parameters from throttle response to steering feel to how the electronic stability control system functions to power distribution via the AWD system. The sport tuned suspension system is very impressive because not only does it give the new 200C that ability to handle tight turns and broad, higher speed turns with a great deal of confidence, but this setup maintains the level of ride comfort that you would expect from a midsized luxury sedan. While there are plenty of buyers who will enjoy the sporty handling characteristics of the new 200, relying on a suspension system that focused too much on handling and not enough on ride quality would have most certainly run off some potential buyers. This suspension setup really combines the best of both worlds with handling abilities that make it one of the most exciting cars in the midsized sedan segment to drive while still being smooth enough to serve as a daily driver. So the 2015 Chrysler 200C is the most powerful car in the midsized sedan segment with a steering, suspension and AWD system that make it a blast to drive…but what about normal driving? Not every person wants to drive to work like they are qualifying for the Rolex 24 and Chrysler knew that so all of the aspects that make the 200 so much fun to drive also make it a very calm, collected daily driver. Under normal driving circumstances, the 3.6L V6 is very quiet and the 9-speed transmission shifts itself through the gears so smoothly that you wont notice most of the higher gears. 1st, 2nd, 3rd and 4th gears are all noticeable, but the transmission moves between the numerically higher gears very quickly and quietly so at no point does the 200 feel like it is “shifting all of the time” – which is a concern of some people who are unfamiliar with these modern transmissions with so many gears. Finally, while the AWD system affords the 200C impressive performance, it also offers superb traction in loose footing such as mud and loose gravel. I didn’t get to experience the new 200 in the snow, but I would bet that the AWD package makes for carefree driving on snowy roads. The current Chrysler 200 offers a smooth, luxury quality ride but few people would accuse it of being sporty. The 2015 200 offers an even better ride with more sporty characteristics than any car in the class. Finally, the official fuel economy ratings for the 2015 Chrysler 200C haven’t been announced, but Chrysler expects that properly configured V6 models will achieve 31 miles per gallon on the highway. During a 25 minute drive on the open road without any driving obstructions while cruising at a speed which stayed within 5mph of the posted speed limit, the on board MPG meter indicated that I was almost always above 30mpg except when I was really running the car hard. I wasn’t able to get a real reading of the combined fuel economy, but I was really impressed by the fuel economy levels that I saw on the highway.

The Final Word
The 2015 Chrysler 200 lineup has a price that starts in the low $20k range and climbs up into the low 30 when all loaded up like my 200C V6 AWD test car. Due to that relatively low price, the 200 continues to compete in the segment with the likes of the Ford Fusion, Toyota Camry, Honda Accord, Chevrolet Malibu and Hyundai Sonata. However, the exterior design, the interior comforts and the high performance and high tech drivetrain allow the 2015 200 to compare favorably to far more expensive European luxury models. Heck, Lincoln and Cadillac sell cars with similar amenities and far less ‘fun to drive factor’ for tens of thousands of dollars more. The 2015 Chrysler 200 looks the part of a true midsized contender and there is no question that this is the best driving option in the affordable midsized sedan segment. If you love driving, the Chrysler 200 will not only allow you to get your high speed jollies, but it will also allow you impressive fuel economy and a ride quality that is smooth enough to make even the pickiest old grandmother happy when you are driving her to an appointment.

The 2015 Chrysler 200 won’t be available to consumers for a few months but when it does arrive, it will most certainly shake things up in America’s most popular car segment. At long last, Chrysler has a midsized sedan that will hang with the best in the business in every single category.

Keith Griffin wrote on March 21, 2014 - 1:49pm Permalink
Chrysler has really done it right with this 200. Just needs to get people behind the wheel. It's a blast to drive.
RIOLITO TIAMZON wrote on March 21, 2014 - 2:15pm Permalink
it is a great site to see the new and improved Chrysler 200 and it's reviews.
Mary Gunn wrote on March 28, 2014 - 10:30pm Permalink
have an 89 Camaro RS time for a change can't find parts. I want a Chrysler 200
Goedon Guidry wrote on September 13, 2014 - 11:49pm Permalink
please keep your camaro i thought the chrysler 200 was the best car i ever bought 4000,miles burnt valvle had to reolace head then the y said oil coliant is busted just happened,they probaly busted it Mark Dodge they are liars they don't care about anybody but yhrir pocket book,take my word stay away from dodge ,chrysler and jeep they are all junk with no service department
G. Lukas wrote on October 19, 2014 - 6:31pm Permalink
I bought one, 200C AWD, a few weeks ago and I love it. Its fun, quick, comfortable and always available to play some more. Mileage vs Power is amazing - No more poor gas mileage when having fun. The safety features abound. I admit I wasn't looking to Chrysler for my next car, but when some one said I should give them a look - they were right. Nice car decent price and a huge fun factor. Yes I'm a fan now!