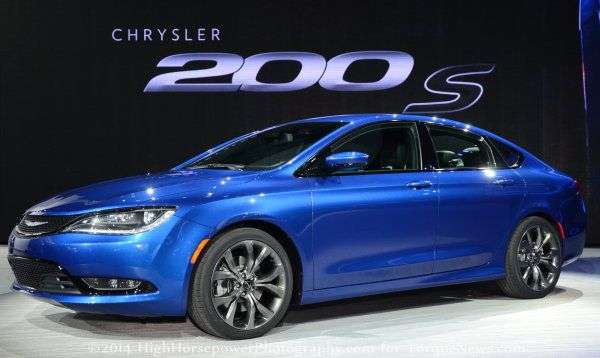 The 2015 Chrysler 200 is the Sharpest Small Chrysler Vehicle Ever

The Chrysler Group showed that they are serious about competing in the midsized luxury market with the introduction of the 2015 Chrysler 200 at the 2014 North American International Auto Show – revealing a car that is one of the most luxurious smaller cars that the company has ever offered.
Advertisement

While Ford focused on the new F150 and Mustang while General Motors favored high performance at the 2014 North American International Auto Show in Detroit, the Chrysler Group opted to show their newest offering for the luxury segment with the 2015 Chrysler 200. The 200 (and the Sebring before it) have long been the Chrysler brand’s bestselling car but in all fairness, both the Sebring and the 200 fall a little short in terms of luxury when compared to the larger 300 or any of the competition in the segment. When this midsized sedan transformed from the Sebring to the 200, the company took major steps to make the 200 more luxurious but it still didn’t fit alongside the impressive 300 sedan. The 200 offered luxury amenities and very solid performance with a low price but it was still hard to call the Chrysler 200 a midsized luxury sedan.

That all changes with the introduction of the 2015 Chrysler 200 as this is unquestionably the best midsize sedan the Chrysler Group has ever built with a striking exterior design, a super plush cabin and a revamped drivetrain lineup that puts it up there with some of the heavy hitters in the American midsized luxury segment. The new 200 will be offered in four trimlines – LX, Limited, 200C and 200S with the first three offering increasingly higher levels of luxury while the 200S adds a heavy dose of sporty styling without departing from the luxury feel. First up is the stunning exterior styling of the 2015 Chrysler 200. While the “original” 200 that was introduced for the 2011 model year was really just a lightly refreshed Chrysler Sebring, this new 200 is entirely new right down to the chassis. Built around a modified version of the Compact US Wide (CUSW) platform from the Dodge Dart, the 2015 200 has a sleek, classy shape that has become quite popular across a great many automakers. This includes a long roof line that flows down into the trunk lid with a fastback design that is reminiscent of the look of the Audi A7. Up front, the new 200 wears a set of HID projection headlights with LD trim along the bottom end with a grille connecting them for a very strong, almost aggressive look. Along the sides are fluid but continuous lines that give this 200 a very proud stance with a slippery look front to back. Speaking of the back, the rear end was not forgotten with a set of bright LED taillights that also look like something that you would expect from a European luxury sedan with an integrated spoiler molded into the short trunk lid. There is plenty of chrome on the new 200 (especially on the 200C) but those who opt for the sportier 200S will see the chrome replaced by black trim.

Where the 2015 Chrysler 200 really shines is in the cabin, where this car really separates itself from any Chrysler Group product before it shy of the 300 and the SRT models. Up front there is a set of plush padded seats wrapped in soft leather; seats that you would expect from a pricey luxury sedan and having spent quite a bit of time in the previous I can attest that these seats make a massive difference in the new 200. The rear seats are of the bench variety but they have that bucket feel in the outboard positions with just as much padding and comfort as the front seats. More importantly, the new 200 has a sizable footwell area that allows for a surprising amount of space for your feet and knees so rear riders are all crushed against the front seats.
However, even if you are incredibly tall, the copious amount of padding on the back of the front seats prevents anyone from busting their knees on the back of the front seats. In addition to those comfortable seats the 2015 Chrysler 200 offers an impressive level of high tech gadgetry including a huge 8.4” touchscreen to control the vast majority of the interior features, with traditional buttons and knobs for the sound system and the HVAC controls located in a panel down on what we would normally call the shift console. This area is located right where the driver’s hand would be when his or her elbow is on the armrest so he or she can make changes to the climate control or radio without lifting an elbow. That is, of course, if they opt not to use the many controls mounted on the steering wheel. Also on this low mounted console is the new dial shifter that was first introduced on the Ram 1500 and for an extra measure of driving excitement, 200 drivers can also rely on the steering wheel mounted paddle shifters to select the gears on their own.

In terms of performance, the 2015 Chrysler 200 comes with a pair of engines – the 2.4L Tigershark 4-cylinder that serves as the performance engine for the Dodge Dart and the 3.6L Pentastar V6 that is at work in nearly every current Chrysler Group vehicle. The Tigershark 2.4 offers 184 horsepower and 173lb-ft of torque with standard front wheel drive and optional all wheel drive while the 3.6L Pentastar with 295 horsepower and 262lb-ft of torque comes standard with all wheel drive. Regardless of the drive configuration or the engine chosen, the 2015 200 comes with the new 9-speed automatic transmission that is standard in the new Jeep Cherokee. This new transmission should allow the 2015 Chrysler 200 to have strong low and mid range acceleration while still offering strong fuel economy when cruising at speed. The powerful all wheel drive setup with the Pentastar V6 makes the new 200 substantially more powerful than the Audi A4 (220hp) while ranking just a touch under the BMW 335xi (300hp) and the Lexus IS350 AWD (306hp). Power like this has become a must in the luxury segment so the 2015 200 Pentastar V6 solves that problem quickly while the segment exclusive 9-speed automatic transmission will help keep the MPGs high.

The 2015 Chrysler 200 is expected to begin hitting dealerships around the country during the second quarter of 2014 so it shouldn’t be long before we see these cars all over the country. When they do hit the market, I expect that we will see a boom in sales as this car appears to be leaps and bounds better than the strong-selling 1st generation 200.

You can check out the 2015 Chrysler 200C in black and the 200S in metallic blue in our gallery by clicking any of the thumbnails on this page!

Aaron Turpen wrote on January 15, 2014 - 4:57pm Permalink
Chrysler definitely did a great job here. The 2013 was pretty good looking already and they took it up another notch.