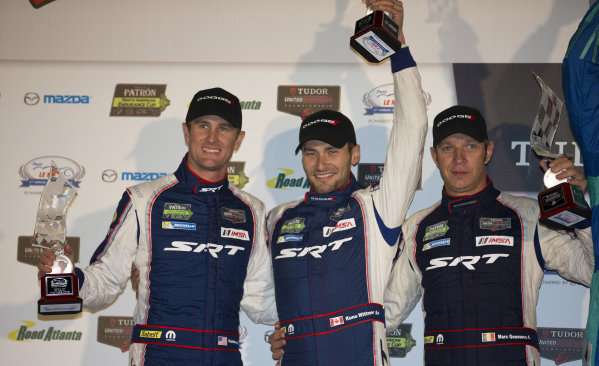 The Dodge Viper and the Chevrolet Corvette went head to head this past weekend to decide the champion for the 2014 IMSA United SportsCar Championship in the GTLM class and when the 10 hour race at Road Atlanta came to an end – Team Viper had claimed their 6th podium spot in the last 7 races to win both the team and driver’s title.
Advertisement

The 2014 Tudor United SportsCar Championship GT LeMans class has been an exciting one this season, with the fastest production based road racers in the world from Dodge, Chevrolet, Porsche, BMW and Ferrari all doing a fine job of representing their brand around the world. Every manufacturer spent at least some time on the GTLM podium this season, but from beginning to end – the key battle was between the Dodge Viper teams and the Chevrolet Corvette teams.

The GTLM Season in a Nutshell
The Viper beat the crosstown rival in the first two events of the season, but Corvette Racing went on a midseason tear that included four straight class wins. This amazing winning streak helped catapult the #3 Corvette, Antonio Garcia and Jan Magnusson to the top of the class standings for the driver’s championship, the team championship and the manufacturer’s championship. However, the Corvette teams slumped down the stretch while the Viper teams hit their stride with a total of 8 podium spots in the final six races leading up to the Petit LeMans at Road Atlanta.

This allowed Kumo Wittmer, Jonathon Bomarito and their #93 Viper to climb into the top spot in the driver’s championship and the team championship heading into the final race of the 2014 season with a narrow lead over Antonio Garcia and his #3 Corvette. Garcia would need to beat Wittmer and Bomarito by at least four positions to claim the GTLM driver and team championship while the #93 Viper drivers simply needed to beat their crosstown rivals to the finish line to secure the title.

The Shootout at Road Atlanta
Coming into the final event of the 2014 Tudor United SportsCar Championship, Antonio Garcia and his #3 Corvette C7R were 7 points behind Kumo Wittmer, Jonathan Bomarito and their #93 Viper. To give himself the best chance at the championship, Garcia would need to win the race and he would need the drivers of the #93 Viper to finish 5th or worse. Unfortunately for Garcia, the Viper team opted to split up Bomarito and Wittmer for the final race, moving Kumo over to the #91 Viper with Marc Goossens and Ryan Hunter-Reay while Bomarito stayed in his familiar #93 Viper, joined by Dominik Farnbacher and Rob Bell. This decision to split up the championship-leading drivers meant that Garcia would have to make sure that both of the Viper race cars finished at least four positions behind his Corvette – making his job twice as tough.

This whole situation set the scene for an exciting final shootout at Road Atlanta, but in the end, the #3 Corvette of Antonio Garcia failed to finish better than either of the Vipers as he finished a disappointing 8th in the class.

The #91 Viper of Wittmer, Goossens and Hunter-Reay finished 3rd in the class while the #93 Viper of Bomarito, Farnbacher and Bell finished 6th in class. This 6th podium spot in 7 races gave Kumo Wittmer the 2014 GTLM driver’s championship.

“This is the first press release as a champion, right? I don’t know how I feel. It hasn’t really kicked in yet, but I’ve just been balling my eyes out for the last half hour or so. I couldn’t have done this without any of the other people on this team. I have five of the best teammates in the world – the best drivers in this paddock. The crew is extraordinary. They really show that they are a championship caliber team and they deserve all the credit, not me. They deserve the credit. The car was amazing. Everything was awesome,” said Wittmer. “I’m just a little emotionally bummed that I can’t share this with Jonathan Bomarito. We were together all year and the fact that we can’t share it is a bummer. In my heart, he’s a champion as well.”

“Amazing day for SRT and the Viper. We won the driver’s championship and the team championship on the 93 car, but then we also podiumed with the 91 Viper,” said Bomarito. “Amazing year in one of the toughest classes in North America and probably one of the toughest in the world. I feel a huge sense of accomplishment in what we achieved this year.”

Ralph Gilles, President and CEO of SRT Motorsports had this to say about the exciting end to the season for the Dodge Viper race program:
“What an emotional roller coaster in an interesting way. What I love about this team is it never gives up. Everybody just put their best foot forward today. I couldn’t be happier for Kuno. He’s somebody we literally found like a Cabbage Patch doll – a young Canadian aspiring sports car driver that’s risen like a star. He’s kept his cool as he matured. Everybody from the veterans to the young kids on the team have done a great job and I couldn’t be prouder. It’s an amazing accomplishment in only two and a half years.”

For the Dodge Viper teams and the Chevrolet Corvette teams, it is onto preparation for The Roar Before the Rolex 24 in early January. For the Vipers, the short offseason will be all about building on their incredible season ending streak while the Corvette teams will undoubtedly be working on getting their groove back before the start of the 2015 season.

By the way, the 2014 Petit LeMans GTLM class was won by the #17 Porsche 911, which allowed Porsche to secure the 2014 GTLM manufacturer’s championship so congrats to Porsche and Dodge on an incredible championship season!