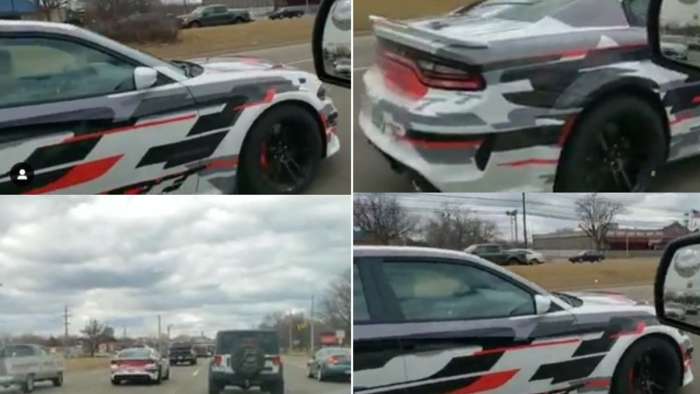 Dodge Charger Widebody with an eye-catching wrap is driving around Metro Detroit streets as the company teases us all.
Advertisement

Over the past year or so, our insiders within FCA have been telling us about the pending arrival of a Dodge Charger SRT Hellcat and it appears as though that arrival could be very soon. Pictures, a video and an informational graphic have surfaced online over the course of the past week, leading us to believe that it won’t be long before the wider Hellcat sedan makes its official debut.

The First Look
According to our friends at Allpar, pictures of what appear to be Hellcat Charger Widebody test cars clad in unique SRT camouflage turned up online over the weekend, along with what appears to be an FCA graphic detailing the features of the widened muscle sedan. Those pictures were followed by video of one of these cars cruising through traffic in Metro Detroit and that video has been met with messages from a handful of other people who have seen these cars (it could be the same car, but we know that there is more than one that looks exactly like this).

In other words, Dodge is seemingly putting the widebody Charger out there for the world to see, although the flashy SRT camo does a good job of hiding the lines a bit. That being said, there is no question that this is the body of a Hellcat Charger with unique wheels and an unmistakable widened body.

I reached out to FCA to see if they had any input on this mysterious machine. They didn’t offer any specific details on the cars shown in these pictures and videos, but they did state that something special is coming to this weekend’s Spring Festival of LXs in Southern California.

“We are taking a Charger design concept to Spring Fest to gauge feedback from the huge Dodge Charger, Challenger and Chrysler 300 enthusiast base that attends the California event each year," said a Dodge representative.

Widebody Details
Based on the information graphic that turned up online, the Dodge Charger SRT Hellcat Widebody will have the same basic attributes as the widebody Challenger. This includes the electronic power steering system, a uniquely-tuned suspension setup, 20x11-inch wheels wrapped in 305-wide rubber and, of course, the widebody package. That includes the flares over all four wheels, along with a widened front and rear fascia.

As an interesting note, the wheels on the Charger in the Instagram video do not appear to be the same wheels as the rollers on the Challenger Hellcat Widebody, so perhaps the 2020 widebody cars will get new wheels.

Of course, we should point out that the original source of this graphic is unknown, so for all we know, it could have been made up by a bored kid, but it certainly looks like the kind of graphic that would be used by FCA or a supplier in a presentation about the wider Charger.

With any luck, the Dodge Charger SRT Hellcat Widebody will debut in the flesh at SpringFest this weekend so that we don’t have to keep speculating about it, but in any case, it appears as though a widebody charger is closer than ever and with a Charger design concept debut planned for this weekend, I expect that it will be the car shown here.

DeanMcManis wrote on March 22, 2019 - 2:29am Permalink
Looks good. Hopefully they will offer the Redeye package at the same time for the Charger.