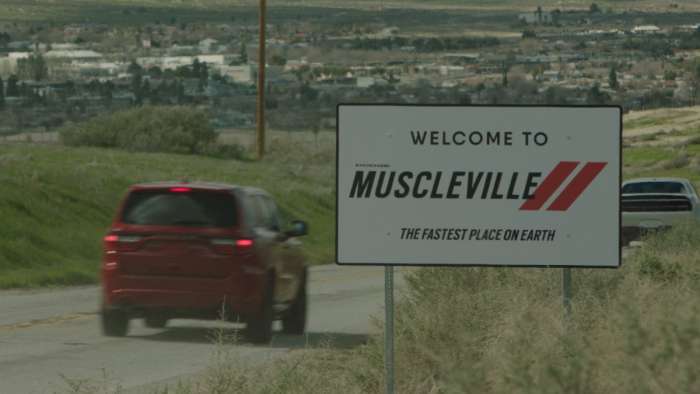 The new marketing campaign for the Dodge brand focuses on high performance, this time transforming a California town into Muscleville USA – a town inhabited entirely by owners of the Challenger, Charger or Durango and Bill Goldberg is the mayor.
Advertisement

As we come into spring in many parts of the United States, the Dodge brand is holding its “Performance Days” sales event during the month of March. To celebrate this sales event, the brand has put together an elaborate marketing campaign in which they transformed Taft, California into Muscleville – the fastest place on Earth. This campaign begins with two television commercials that are already available on the Dodge YouTube channel (and below on this page), followed by two more commercials later this month.

“There’s no better time than Spring to kick off muscle car season,” said Steve Beahm, Head of Passenger Car Brands, Dodge//SRT, Chrysler and FIAT – FCA North America. “And what better way to celebrate our Dodge//SRT enthusiasts than to create a town just for them. In fact, our fans had the opportunity to line up on Main Street to meet the ‘Mayor’ and participate in the production, making them honorary residents of ‘Muscleville,’ a Dodge owner’s paradise.”

Welcome to Muscleville
Dodge’s Muscleville is a mythical location where there are no speed bumps, smoky burnouts are encouraged, the police officers don’t really enforce the speed limit and Main Street is literally a drag strip. Former pro wrestler and hardcore automotive collector Bill Goldberg is the mayor of the town and in the videos, it appears as though literally everyone in the town drives a Durango, Charger or Challenger. In fact, one commercial states that everyone in the town has a Hemi V8 under the hood, so this series isn’t showing any love to the Pentastar V6-powered models.

Update: Since sharing this piece in a handful of large Mopar Facebook groups, it has been pointed out to me that not all of the cars in the Muscleville commercial are Hemi-powered. In the drag racing scene on Main Street, there is a stunning color-changing (purple-blue) Dodge Charger parked along the side of the street. That custom sedan is owned by Zakkre Tardiff and it packs V6 power, so for the short time that Muscleville existed, the V6 models were welcome as well.

Street names in Muscleville include SRT Street, Charger Lane and the Hellcat Highway. The local movie theater is called the Hemiplex and in the commercial, the movies showing are “Burning Rubber Man” and “The Scat Pack”, with “Streets of Smoke” coming soon.

Of course, there is a bit of irony in the fact that Muscleville is in California – the most unfriendly state for performance car enthusiasts. Many of the cars that Dodge sells today are subject to being pulled over for the volume of their exhaust system, with those owners who run an upgraded exhaust system being hit with costly tickets. If Muscleville was real, it would be the only place for a muscle car enthusiast to live comfortably and enjoy their vehicle in California.

Marketing Campaign
The Muscleville marketing campaign officially begins this week, with the first two commercials below making their television debuts this week, but they are already available on the Dodge YouTube channel. There will be two more commercials introduced as part of the Muscleville campaign, and with these spots being designed to promote the Performance Days sales event that ends in April, we should see the next two commercials soon.

In the meantime, enjoy the first two videos depicting life in Muscleville, California.

Michelle Arguello wrote on March 6, 2019 - 2:35pm Permalink
Muscleville -the fastest place on earth
Andrew G. Woodward wrote on March 12, 2019 - 8:47pm Permalink
I love it!!! keep up the good work Dodge! but please make one in east TN! lol. And make more manuals, yes with the clutch! (charger)
Don Willhelm wrote on March 31, 2019 - 2:22am Permalink
When will Dodge be back to Muscleville? If you would advertise locally there are many Dodges already here in Muscleville (Taft)
Don Willhelm wrote on April 1, 2019 - 6:39pm Permalink
Show up the first Friday of the month cruise night in the Spring and Summer months in Muscleville (Taft, CA) lots of Dodge power along with some other brands.
Tara Campbell wrote on August 18, 2020 - 3:25am Permalink
Hey - I was checking out your site and I’m impressed with how clean and professional it looks. Adding video to your website has become an absolute MUST. Even something basic that clearly defines exactly what it is you're offering & why work with your company vs competitors... My team, based out of Toronto, Canada, creates quality animated explainer videos. Our award-winning videos are proven to increase customer engagement and decrease user bounce rate. Email me back for some explainer video samples, pricing, or just to say hi! --Tara Campbell Email: [email protected] Website: VidTheBiz.com