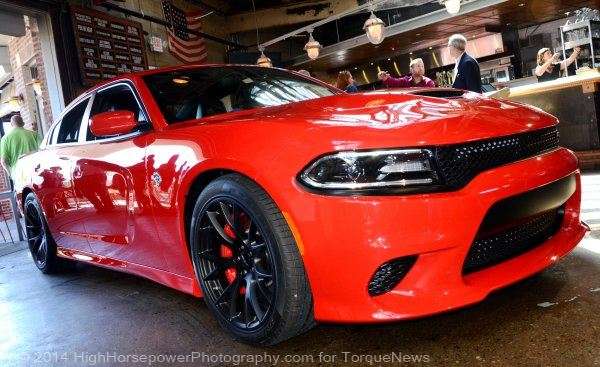 Dodge Charger Hellcat Pricing is Just as Impressive as the Performance

The 2015 Dodge Charger SRT Hellcat pricing has been announced and starting at just $63,995 including the $1,700 gas guzzler tax, the supercharged 4-door muscle car is substantially less expensive than any of the other cars on the list of the world’s most powerful sedans… while also being the most powerful car on that list.
Advertisement

Now, you would think that the most powerful and best performing sedan ever would come with an exotic-like price tag since the 2015 Dodge Charger SRT Hellcat competes with the likes of the Mercedes Benz S65 AMG, the Bentley Flying Spur W12, the Porsche Panamera Turbo S and many other high end models. Fortunately, you would be wrong, as the 707hp Charger will not only slaughter the competition on a race track or a dyno, but it also costs a fraction of the cost of those European sedans.

The Hellcat Charger Pricing
The 2015 Dodge Charger SRT Hellcat with the supercharged 6.2L Hemi, the 8-speed transmission, the adaptive suspension system, the high performance braking package and all of the rest of the attribute’s that come standard with the Hellcat package starts at just $63,995 including the gas guzzler tax of $1,700. This is right where I expected the pricing to be when I made my prediction, as I expected it to be between $64k and 65k, and this price does not seem to include the destination fee that will put it right up into that predicted range. Chrysler hasn’t stated the destination fee for the 2015 Charger, but I would expect it to be right on par with the $995 that comes with the Challenger lineup, so the 707hp Charger would cost around $64,990 before any other adjustments.

This price represents a mild markup of just $2,005 over the $61,990 base price 2015 Dodge Challenger SRT Hellcat with the 8-speed TorqueFlite automatic transmission (including gas guzzler, excluding destination since it has not been officially announced for the 2015 Charger). It might be expensive “for a Dodge sedan”, but when you consider the competitors of the Hellcat Charger, it is actually an incredible deal.

Hellcat Charger Pricing Versus the Competition
Sure, it is hard to say that the 2015 Dodge Charger SRT Hellcat “only” costs $64,000 because that is a whole lot of money to the average Joe, but when you take a look at the other sedans on the list of the world’s most powerful – it becomes much harder to question that Hellcat pricing.

The next most powerful gasoline powered sedan in the world is the Mercedes Benz S65 AMG and although it “only” has 621 horsepower, it has a staggering price tag of $222,000. For that much money, you could be THREE Hellcat Chargers and still have $30,077 left over and for that money, you could buy a 2015 Ram 1500 Tradesman to drive in the winter. Or, you could buy 1 Hellcat Charger, 1 Hellcat Challenger with the manual transmission ($61,000), a 2015 Dodge Viper SRT ($84,885) and still have a little over $10,000 left for gas and tires….all for the price of the Mercedes Benz S65 AMG that will struggle to keep up with the Hellcat Charger.

Let that process for a second.

Below is a complete list of the world’s most powerful sedans with their horsepower, torque and official pricing.

Stay tuned to more information on the entire 2015 Dodge Charger lineup as well as a full drive review of the world’s most powerful sedan very, very soon.

John Goreham wrote on October 17, 2014 - 8:24pm Permalink
I might be off by one or two grand, but I am pretty sure you can buy a Dodge Charger Hellcat AND a Tesla Model S 60 for the price of a single Model S P85D. You could then apply your taxpayer funded rebate on the Model S 60 to the Hellcat's gas guzzler tax and with the leftover money take you family to Disney world. Twice.