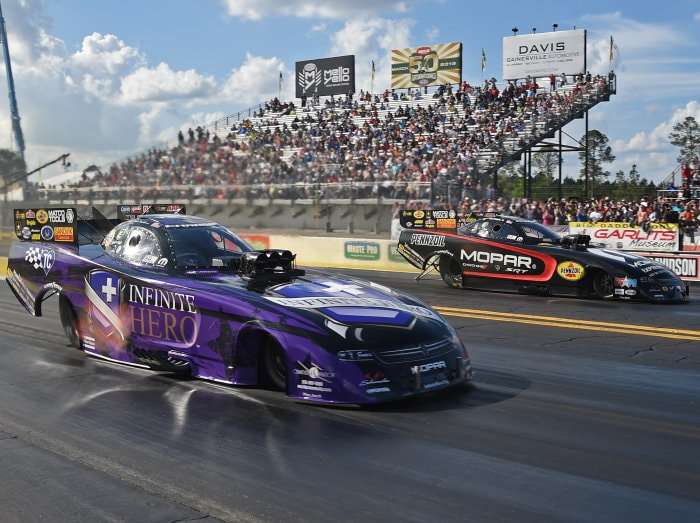 The 2018 Gatornationals in Gainesville, Florida saw a final round battle between the Don Schumacher Racing Dodge Charger funny cars of Jack Beckman and Matt Hagan, with “Fast Jack” grabbing his first win of the season.
Advertisement

After the first three events of the 2018 NHRA Mello Yello Drag Racing Championship season, the Dodge Charger funny cars of Don Schumacher Racing has once again stepped forward as the team to beat. After Matt Hagan won the first event of the season, Tommy Johnson Jr lost in the second event to the Camaro of Courtney Force, but in the third event of the season, DSR came storming back to dominate the 2018 Gatornationals.

Early Control
Fast Jack Beckman opened funny car qualifying for the 2018 Gatornationals with a run of 3.958 at 325 miles per hour in the first round of qualifying, setting the pace for the field.

In the second round of qualifying, Courtney Force, Robert Hight, Shawn Langdon, Tommy Johnson Jr and Matt Hagan all beat Beckman’s first round time – but Fast Jack got even faster, running a 3.911 at 332mph. That 3.911 run in the second round, along with the times of the other drivers in the top six, would end up standing through the end of qualifying.

Some other drivers including Dodge Charger driver Ron Capps would improve in the third and fourth rounds, but the top six spots were all decided in round #2.

As a result, the qualifying order for the funny car class of the 2018 Gatornationals had Beckman’s Charger in the top spot followed by the Camaros of Courtney Force and Robert Hight in second and third and the Toyota of Shawn Langdon sat fourth. Fast Jack’s teammates claimed the fifth, sixth and seventh spots heading into eliminations while the Camaro of John Force had to settle for a 15th place starting position.

DSR and JSR Shine in Elims
The first round of eliminations from the 2018 Gatornationals was a good one for the Dodge Charger funny cars of Don Schumacher Racing and the Chevrolet Camaro funny cars of John Force Racing. Beckman beat Jim Campbell, Johnson beat Cruz Pedregon, Capps beat Bob Tasca, and Hagan beat Tim Wilkerson as all four Chargers advanced to the second round. Also, Courtney Force beat her dad John Force while Robert Hight beat Dave Richards, sending two of the three Camaro funny cars into the second round.

In the second round, the Don Schumacher Dodge Charger funny cars asserted their dominance over the John Force Racing Camaros, with Ron Capps beating Courtney Force and Matt Hagan beating Robert Hight in a race where both cars exploded as they neared the finish line. Hagan would continue on in his backup car. Also in the second round, Jack Beckman beat Del Worsham while Tommy Johnson Jr lost to the Toyota of Shawn Langdon.

In the semifinals, Jack Beckman took on Shawn Langdon and Ron Capps took on teammate Matt Hagan. In the run between Beckman and Langdon, both cars had issues, but Fast Jack got to the finish line first. In the other half of the round, Ron Capps got out to a starting line lead over Matt Hagan, but when Capps ran into issues, Hagan cruised to victory – setting an all-DSR final round between a pair of supercharged Dodge Charger funny cars.

In the finals, Jack Beckman grabbed the advantage on the tree and he held on to win an incredible drag race, with Hagan running the quicker 4.034 but losing to Beckman’s 4.035.

The Championship Race
After three events, Matt Hagan has taken the lead in the race for the 2018 NHRA funny car championship, leading Jack Beckman by 21 points. Courtney Force is in third (49 points back), Ron Capps is fourth (-50) and Robert Hight is fifth (-83). Tommy Johnson Jr is sixth (-86), so right now, the entire top six is comprised of DSR Chargers and JFR Camaros. This is likely to be the story throughout the season.