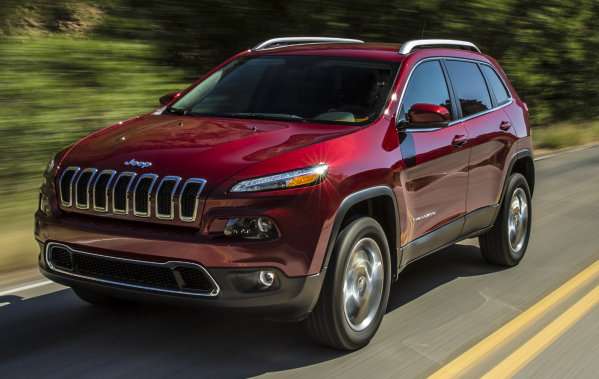 Deliveries of the 2014 Jeep Cherokee Have Finally Begun

According to the Mopar super-sleuths at Allpar, the first shipment of 2014 Jeep Cherokee midsized SUVs was finally loaded onto transporters and sent off to dealerships around the country – ending the lengthy delay that is believed to have been caused by a drivetrain calibration issue.
Advertisement

The launch of the new 2014 Jeep Cherokee is an important one as this is the first vehicle in the Jeep brand to have been designed under the reign of Fiat leadership. The 2014 Cherokee replaces the hot selling Jeep Liberty and with such a legendary name, this new midsized SUV has some big shoes to fill. Because of that, the Chrysler Group top brass wanted to make sure that all of the bugs were worked out before shipping the Cherokees to dealerships.

Official details have been very limited but cause for the delay in the launch of 20114 Jeep Cherokee shipments was believed to be a calibration issue with the new 9-speed automatic transmission. Due to this calibration issue with the brand spankin’ new transmission, the vehicles that rolled off of the assembly line weeks ago were kept in a holding lot until each of them could have a retuned transmission computer calibration installed. This move helps to ensure a more positive owner experience while also lowering the likelihood of needing to ask dealerships to install the reprogrammed control system – or having to issue a recall to address a shifting problem.

Other hang-ups in the delivery of the 2014 Jeep Cherokee related to a brief shortage of the ZF designed and Chrysler built 9-speed automatic transmission during the ramp-up period of production. There was also a period of production constraint for the TigerShark 4-cylinder engines but with all of those annoying problems handled as quickly as possible, the first batch of Cherokees headed to dealerships around the country beginning yesterday.

In addition to the company’s obvious desire to avoid issuing a recall for the transmission calibration of the 2014 Jeep Cherokee, the company also wants to get everything right with this new model due to some of the early negative reviews based on the appearance of the SUV. Since the 2014 Cherokee was introduced with its truly unique exterior design, there have been plenty of folks in the Jeep enthusiast community who have voiced a powerful, negative opinion of the unique styling. Fortunately, those who have driven and reviewed the new Cherokee have spoken very highly of the midsized SUV so provided that it can do everything that a modern Jeep needs to do – the Jeep community will be more likely to accept it regardless of what it looks like.

Now that the 2014 Jeep Cherokee is becoming available for purchase around the country, it is only a matter of time before we start hearing the real world stories from the owners of these new SUVs. The combination of the new 3.2L Pentastar V6 and the 9-speed automatic transmission is expected to offer a fine balance of performance and fuel economy that could be very enticing to the types of buyers that the midsized crossover segment attracts. The new Cherokee will also offer a variety of drivetrain configurations to address the needs of every buyer…from those who will actually take it offroading to those who will hardly drive it in any condition shy of dry, paved roads. Finally, this new Jeep is packed full of interior goodies to allow it to stand out for those buyers who like as much high tech gadgetry as possible.

Andres wrote on October 22, 2013 - 11:00pm Permalink
Edmunds is writing that Chrysler is test-driving each Cherokee before it is released for delivery. Aren't all vehicles usually tested before shipment? Also, why are these cars called "often-delayed" in the media? Thank you.

Toyota's First EV Will Have a Name of BZ: Toyota BZ
First Videos From Inside The Boring Company's Las Vegas Loop
END_OF_DOCUMENT_TOKEN_TO_BE_REPLACED