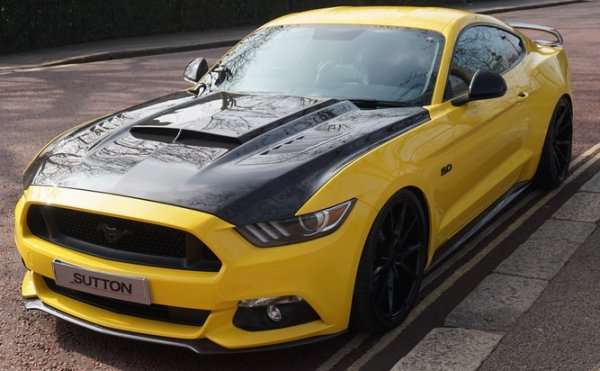 For prospective Ford Mustang owners in the UK who like the look but who demand more power, the Clive Sutton dealership group in central London has rolled out a variety of packages that can improve handling, enhance the look and lift the output to 700 horsepower.
Advertisement

The new Ford Mustang has proven to be a huge success in the European market, so it should come as no surprise that performance companies in those markets are offering big power packages. We have featured some other non-US performance options including the newest Shelby Super Snake in Australia, but today we bring you one that is targeting those Mustang buyers in the UK. The Clive Sutton dealership group has a long history of offering all sorts of high performance vehicles imported from other countries, but in addition to selling the newest Ford Mustang in stock form – the Sutton group has also assembled a collection of performance packages for the new pony car in EcoBoost 4 and V8 form.

The CS700 Supercharged Mustang
In talking about the Clive Sutton Ford Mustang options, I will start at the top with the CS700 package. The standard Ford Mustang with the 5.0L V8 offers 410 horsepower (BHP) in the UK, but with the CS700 package, a supercharger lifts the output to 645 horsepower. Tack on the Extended Power package, which adds a larger throttle body and a carbon fiber intake setup, and the engine offers a whopping 700 horsepower.

Next, the CS700 Ford Mustang features an adjustable kW suspension setup that can lower the car by more than an inch, while also improving handling and removing some weight from the car. The CS700 package builds on the factory Brembo brake system with new 2-piece rotors, which are tucked under Vossen wheels wrapped in Bridgestone rubber.

Finally, the CS700 Ford Mustang gets a carbon fiber body kit with a new front splitter, hood, rear spoiler, tail light panel and side skirts – giving this Mustang a very unique look from other packages on the market. The interior also gets a carbon fiber upgrade via a unique dashboard.

There is one CS700 Ford Mustang in yellow on the Clive Sutton website with a price of £75,950. Based on current currency conversion rates, that translates to just under $110,000 USD.

The CS500 and CS350 Mustang
For those folks who don’t want 645-700 horsepower – or who don’t want to pay $110,000 for a 700hp Ford Mustang, Clive Sutton also offers a pair of lower performance packages, including one for those models with the 2.3L EcoBoost 4-cylinder engine.

The CS500 is based on the Ford Mustang GT, and while it comes with the suspension setup and a similar body kit package to the CS700, it doesn’t have the supercharger. Sutton does up the power a bit, to 440 horsepower (remember, 410 BHP is stock), but this package is designed to focus more on the appearance and cornering capabilities – while also including the high performance active exhaust system from the 700hp package. The CS500 Mustang on the Clive Sutton website has a price of £56,650, or about $82,000 USD based on current exchange rates. For those unsure, the Ford UK website lists the base price of a 2016 Mustang GT as £34,995, or around $50,560.

Finally, if you want the look and handling capabilities of the new Ford Mustang, but you prefer the smaller, more efficient engine – the CS350 is the answer. There are no cars with this package on the website so it is unclear what the “on the road” price is for the beefed-up turbocharged 4-cylinder pony car, but we know that this package lifts the output to 330 horsepower, while adding the appearance and handling goodies from the CS500.

Thanks to Big Max for the tip!

Steve wrote on May 24, 2016 - 2:27pm Permalink
I don't get why you'd do this, a Ford racing supercharger is available for something like $8k and if you're reasonably mechanically inclined you can do it yourself. . I don't get the fascination with super chargers, the coyote engine has a lot of potential, I've seen relatively inexpensive rebuilds (<$10k) that get a naturally aspirated coyote above 600 HP. improving the intake and exhaust + a performance tune alone can nearly get you to 500 HP.

Panasonic Updates Profit Forecast, Noting How Much Tesla Batteries Help The Jump
2022 Porsche 911 GT3 Laps Nurburgring in 7:04 With Journalist Behind The Wheel
END_OF_DOCUMENT_TOKEN_TO_BE_REPLACED