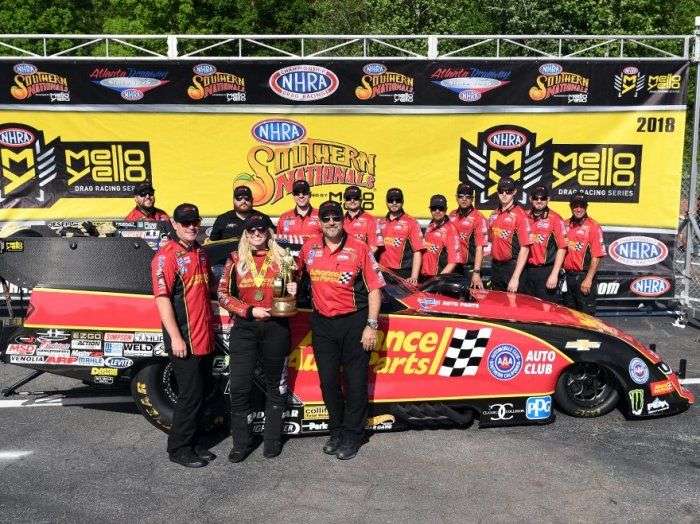 Courtney Force Drives Her Camaro to Victory in Atlanta

Courtney Force grabbed her second Wally of the year this past weekend in Atlanta, winning the Southern Nationals in her Chevrolet Camaro after a battle with the Dodge Charger of Matt Hagan.
Advertisement

The 2018 NHRA season has been very different from the previous years, with Toyota Camrys winning 3 of the first 6 races. Last year, Don Schumacher Dodge Charger funny cars won 12 of the first 13 races with John Force winning the other, but after the Dodge and Chevy teams claimed the first 3 races of the season, Toyota teams went on a 3-race run, with JR Todd winning back-to-back and Cruz Pedregon getting his first win in years.

However, at the Southern Nationals in Atlanta, the JFR Camaros and DSR Chargers were the top dogs, with Courtney Force driving her Chevy to win #2 on the season.

Qualifying
The qualifying effort for the 2018 NHRA Southern Nationals got off to a slow start, with Cruz Pedregon being the quickest in round 1 in his Toyota with an ET of 4.118. By the end of qualifying, that time would be 13th best. JR Todd was second quickest with his Camry, leading many to believe that this event would go the way of the last two – with a Toyota taking the win.

Cruz would remain towards the top of the order after the second round, with only the Camaro of Robert Hight jumping ahead of him, but with the entire field getting quicker, the Toyota teams had lots of Dodge and Chevy competition.

In qualifying round #3, Tommy Johnson Jr also leaped over Cruz and in the final round, Courtney Force jumped over everyone, claiming the top spot heading into eliminations with a 3.932 at 324 miles per hour. Teammates Robert Hight and John Force qualified second and fifth.

For the Don Schumacher Racing Dodge Charger teams, qualifying was pretty ugly. Although Johnson was able to grab the third spot, Beckman started 10th, Hagan was 11th and Capps was 12th.

In the second round Courtney Force beat Tim Wilkerson and Cruz Pedregon beat Capps to set up one side of the semifinals while on the other side, Beckman beat Tasca and Hagan beat teammate Johnson.
In the semis, Cruz pulled the big hole shot advantage over Courtney Force, but the Camaro drove around the Toyota on the big end to advance. On the other side, Hagan took a starting line advantage over Beckman and never looked back, setting up a Chevy-vs-Dodge battle in the finals.

In the final round of the NHRA Southern Nationals, Matt Hagan grabbed the starting line advantage, but Force’s Camaro once again came from behind for the big win.

Season Standings
As a result of her second win of the season, Courtney Force and her Camaro have pulled into the top spot in the 2018 NHRA championship race. Beckman, Hagan, Johnson and Todd fill out the top five.