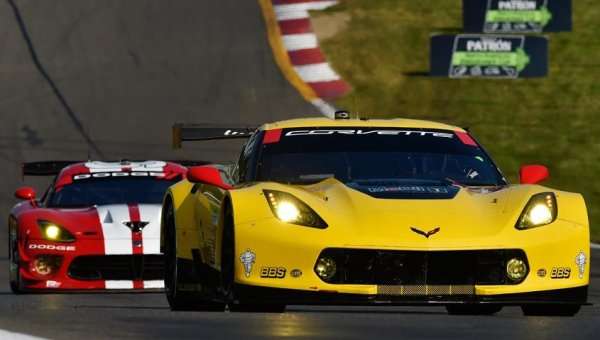 The new Chevrolet Corvette Z06-based C7.R race car was introduced for the 2014 Tudor United SportsCar Championship and while the teams got off to a rough start in the first two events of the season – the #3 Corvette C7.R has claimed the GT LeMans class win in each of the past three races.
Advertisement

When the 2014 Chevrolet Corvette C7.R was introduced alongside the 2015 Corvette Z06 on which the new endurance racer is based, it was widely expected that the C7 Corvette race car would establish the same dominance as the C6 Corvette race car. However, mechanical problems in the Rolex 24 at Daytona International Speedway and in the 12 Hours of Sebring put the Corvette Racing program behind the 8 ball early in the season. Fortunately, the teams were able to work out the bugs since Sebring as thanks to that – the #3 Corvette C7.R won the GT LeMans class in the third and fourth events of the IMSA/Tudor endurance racing series.

Both of the Corvette Racing teams headed into Watkin’s Glen this past weekend with the hope of making it three in a row, but they would have to beat the Dodge Viper GTS-R race cars that had their previous “balance of performance” penalties lifted for the New York race. Before the Vipers were hit with a weight and power penalty, they were much faster than the Corvettes so Watkin’s Glen would prove to be a great test of the Corvette after winning in Laguna Seca and Long Beach.

Things Start Off Rough but Improve Quickly
The #3 and #4 Corvette C7.R teams both hit the track with high hopes in the first practice this past weekend, but things didn’t go as planned. In the first practice session, the Corvettes were among the most active cars in the GTLM field, running a total of 49 laps between the two cars. Unfortunately, that experience didn’t lead to a great time as the #4 Corvette was only the 6th fastest of the 11 cars in the class while the #3 Corvette was 9th fastest.

Things got a whole lot better for the #3 Corvette, as the team looking to win its third straight turned in the quickest GTLM class of the session, beating the #55 BMW by a little better than a tenth of a second. Things weren’t quite as good for the #4 Corvette, as that half of the team dropped to 9th fastest. The #3 Corvette would continue as one of the quickest cars in the class in qualifying, but they lost the pole position by almost 3 tenths when the BMW driven by Bill Auberlen put down an incredible qualifying time.

By the time the 6 hour race at Watkin’s Glen began, the Corvette Racing team had both cars tuned in very well, and for much of the race both the #3 and #4 Corvette C7.R were running in the top two positions. As was the case in the previous two races in California, the Corvettes were hard to beat when they weren’t dealing with mechanical issues like they did at Sebring and Daytona so while other cars would occasionally grab the lead during pit stops, the Corvettes were the class of the GTLM field throughout the race.

However, the new and improved Dodge Viper GTS-R race cars were also very fast all day and when it came down to the final minutes of the race, we had a GTLM shootout for the win between the two American supercars. The #3 Corvette and #91 Viper battled down to the last lap, but the Corvette managed to hold off the Viper and win its third straight race.

The Corvette C7R Teams Take the Championship Leads
After starting off the 2014 Tudor United SportsCar Champion with mechanical problems in both Daytona and Sebring, the #3 Chevrolet Corvette C7.R driven by Antonio Garcia and Jan Magnusson has reeled off three straight class wins and with that trio of victories, Chevrolet has pulled into first place in the GT LeMans manufacturer’s championship – one point ahead of the Porsche contingent.

In the race for the driver’s championship, Antonio Garcia and Jan Magnusson are tied for first in GT LeMans with 154 points while BMW drivers Bill Auberlen and Andy Priaulx are tied for second with 145 points each. The drivers of the #4 Corvette – Tommy Milner and Oliver Gavin – are tied for third with SRT Viper drivers Dominik Farnbacher and Marc Goossens with 140 points.

There are six events left in the 2014 Tudor United SportsCar Championship so all of the championships are still up for grabs after the first five GTLM races – but the Corvette Racing teams have put themselves in a good spot in a run for yet another handful of class championships.