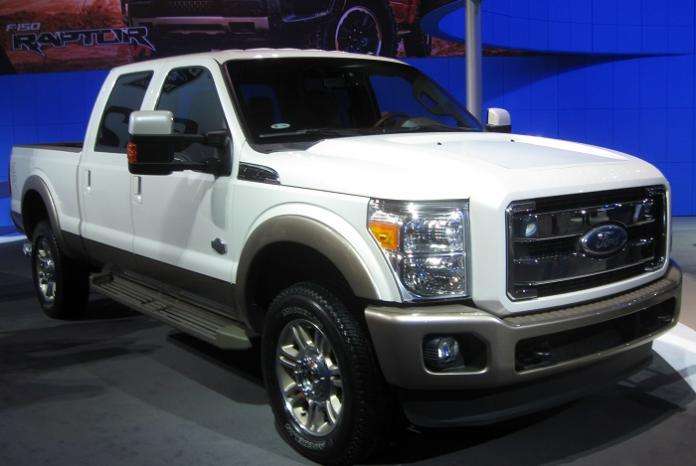 A closer look at the WD40/SEMA Cares Ford trucks

The 2012 SEMA Show brought about the public debut of the customized 1953 Ford F100 and the 2010 Ford Super Duty F350, both of which are designed by automotive legend Chip Foose and clad in the colors of the WD40 brand and this weekend, I had a chance to get some more details on these two charity trucks.
Advertisement

For the fourth year in a row, a team of well known individuals and companies lead by Chip Foose and WD40 worked together to build a special vehicle that would be auctioned for charity after making a SEMA Show debut. However, unlike past years where the SEMA Cares Charity group has built one custom muscle car – 2012 brought about a pair of unique Ford trucks. These two trucks drew huge crowds at the SEMA Show but as both of these cool custom pickups have headed off to their next stops – I spoke with a representative from the WD40 brand this weekend to get a better idea of what went into the custom 1953 and 2012 Ford trucks.

The WD40/SEMA Cares 1953 Ford F100
The 1953 Ford F100 (shown above on the right with the lovely pinup style model) is fairly subtle as Chip Foose designs go but the folks at WD40 wanted this vintage Ford pickup to look like the original truck that the WD40 company (then known as Rocket Chemical Co). This truck is almost completely white with a black roof line and black running boards while the logos on the doors, the wooden bed side paneling and WD40s are really the only things that allow this truck to stand out from some other immaculate 1953 Ford F100. MHT Wheels has provided the unique gold and silver Foose wheels while Pirelli has provided the tires and McGard has added wheel locks to keep these unique rollers where they belong.

Under the hood, this 1953 Ford F100 designed by Chip Foose features an original Ford flathead engine built by L&R Automotive with performance parts by Egge, wiring from both American Auto Wire and Painless Performance, oil and air filters from the folks at K&N and an AcoustiShield thermal acoustic insulation kit courtesy of Quiet Ride Solutions. Finally, Street Scene Equipment and LMC Truck worked with Foose Designs to bring everything together with the result being one absolutely stunning vintage Ford pickup.

The SEMA Cares/WD40 1953 Ford F100 will make a few stops before heading to the Barrett Jackson Collector Car Auction in Scottsdale, Arizona that runs from January 13th through the 20th 2013. The proceeds of this auction will go to benefit Childhelp and the Victory Junction camp.

The WD40/SEMA Cares 2012 Ford F350 Super Duty
The second vehicle for the WD40/SEMA Cares charity group is the 2012 Ford F350 Super Duty shown in the gallery on the right (click any thumbnail for a closer look at both of these trucks). This truck follows in the design cues found on the Dodge Challenger, Ford Mustang and Chevrolet Camaro that have been customized by Foose and the team over the past three years. This begins on the outside with a unique BASF paint scheme by Chip Foose that is more like what we have come to expect from the well known auto designer.

Like a proper SEMA Show Ford Super Duty, this WD40/SEMA Cares F350 has a significant lift compared to stock with a lift kit and suspension components provided by ICON Vehicle Dynamics while the folks at Pro Comp contribute suspension components as well. To spruce up the exterior, DynaTrac added a set of flashy differential covers, LEER has added a hard tonneau cover, Husky Liners has included a bed rug, Takit has added one of their bed slides, Street Scene Equipment has provided the unique body cladding and BF Goodrich has fitted up a set of 42x14.50R20 Mud Terrain T/A KM2 tires on custom chrome rims. Inside, there is a set of Katzkin leather clad seats sporting the WD40 logo, Husky Liners laid in a set of premium floor mats and the Audio Innovations team has installed a monster stereo system with components from Polk Audio and PowerBass.

Under the hood, the 6.7L PowerStroke diesel engine of the WD40/SEMA Cares 2012 Ford Super Duty F350 is equipped with a K&N intake system and a free flowing MagnaFlow exhaust system with the result being 400 horsepower at 2,800rpm and 800lb-ft of torque at 1,600rpm. The folks from WD40 have assured me that while this truck is made to work more than it is intended to go fast – this custom truck will put a serious smokin’ to the huge mud tires thanks to all of that torque.

Like the 1953 Ford F100, this customized 2012 F350 will head to auction with the proceeds going to charity but the exact auction date has not yet been determined – although the folks at WD40 have explained that this truck will tour quite a bit over the next year or so.

On the behalf of everyone at TorqueNews, I would like to extend a special thanks to all of the companies who donated parts and time to these builds as without the partners – these charity projects would not be possible. The first three WD40/SEMA Cares charity auction vehicles raised over $400,000 and these two unique Ford pickups should continue to help these children’s charities around the country.

For a closer look at both of WD40/SEMA Cares custom Ford trucks from the 2012 SEMA Show, click any of the thumbnails on the right.