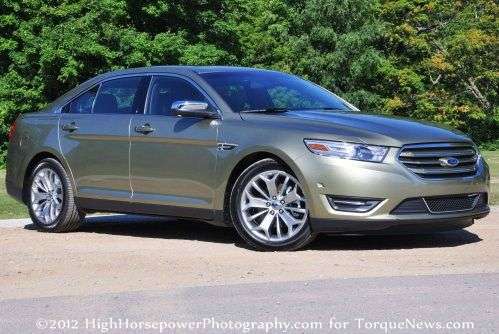 Yesterday, Ford Motor Company announced that the 2013 Ford Taurus would be offered with a new 2.0L 4-cylinder engine that puts out an impressive 32 miles per gallon on the open road and shortly after making that announced, FoMoCo put me in the new EcoBoosted 2013 Taurus to experience this peppy, fuel sipping engine.
Advertisement

Learning that the 2013 Ford Taurus offers 32 miles per gallon on the highway and a combined figure of 26mpg is quite impressive but there is a certain level of concern applied to any mention of a big, roomy sedan offering such impressive fuel economy from a small displacement 4-cylinder engine. Ford boasts that the 32mpg mark makes the 2013 Taurus equipped with the new 2.0L EcoBoost more efficient than the Chrysler 300 (31mpg), the Dodge Charger (31), the Chevrolet Impala (30) and the Toyota Avalon non-hybrid (28) while 26mpg combined ranks the 2013 Taurus right alongside the far more expensive Mercedes Benz E350 Bluetec Diesel (26mpg) and the Porsche Panamera S Hybrid (25). Unfortunately, the majority of those models get their best fuel economy from larger engines which – in most cases – means more power.

Bragging rights on paper are a big deal in the auto industry but when it comes down to the brass tacks, nothing is more important than how the vehicle drives so to show us just how good this new 4-cylinder EcoBoost engine really is – Ford invited me to spend some time yesterday driving the 2013 Taurus with the 4-cylinder, 2.0L EcoBoost engine.

The 2.0L EcoBoost 4-cylinder engine offered in the 2013 Ford Taurus offers 240 horsepower and 270lb-ft of torque. Those figures place the new Taurus engine option below the Chevy Impala, the Dodge Charger, the Chrysler 300 and the Toyota Avalon in terms of horsepower output but the beefy torque output of the 2.0L EcoBoost comfortably bests all four of those similarly priced full size sedans. Even with that in mind, the concern arises that the Taurus might just be too heavy for this compact engine, regardless of the fuel economy levels – weighing over 4,000 pounds in front wheel drive trim. Luckily, that does not seem to be the case.

Our test subject was a 2013 Ford Taurus Limited, fitted with front wheel drive, a six speed SelectShift automatic transmission and, of course, the new 2.0L EcoBoost 4-cylinder. Considering that the majority of the vehicles in the full size sedan class are packing over 300 horsepower, I expected the 4-cylinder EcoBoost Taurus to feel underpowered – or at least to exhibit signs of the dreaded “turbo lag” that many associate with turbocharged vehicles. For those unfamiliar with the term, turbo lag is the time that it takes the turbocharged to reach maximum internal RPM – thus the point at which it is creating the specified amount of boost pressure to help this small engine reach such lofty power numbers. However, Ford’s consistent work with turbocharging technology shone through with almost no sign of turbo lag. As soon as you hit the throttle, the EcoBoost 2.0L is quick to respond, allowing the car to very easily keep up with traffic…whether the speed limit is 25 or 70. This diminutive engine also packs enough torque to allow the 2013 Taurus to spin the tires a bit on a hard launch.

As I toured the roadways around Dearborn, Michigan in the 2013 Ford Taurus Limited shown in the image above on the right in the new Ginger Ale Metallic exterior paint choice, I was surprised at both the quick response and how quiet the engine was under load. Many smaller displacement engines sound like they are working very hard when being pushed to their limits but the quick-revving EcoBoost 4-cylinder seems very comfortable throughout the RPM range along with being surprisingly quiet.

I logged around 50 miles on the 2013 Ford Taurus Limited with the new 4-cylinder EcoBoost engine so while that wasn’t enough to check the fuel economy over a full tank of gasoline; our time on the highway (based on the vehicle’s on-board computer) showed that 32 miles per gallon was a very realistic figure. When driving around town in steadily moving traffic with speeds in the range of 40-50mph, I found that the fuel economy wandered between 20 and 30 miles per gallon which was impressive, considering how much I was playing with the throttle to find any weaknesses in the power band.

In short, those who are concerned that the new EcoBoost 4-cylinder engine found in the 2013 Ford Taurus SHO simply isn’t enough engine for that large of a vehicle should definitely drive the new model before passing judgment. During my time spent behind the wheel, there was really no downside to this new powerplant and along with offering 32mpg on the highway – it is still a great car to drive. This new engine doesn’t offer the pure driving excitement that you get from the Ford Taurus SHO which uses an EcoBoost V6 measuring 3.5L and packing 365 horsepower but the new EcoBoost 4-cylinder offers more than enough power for the average full size sedan buyer. This engine may not be the ideal choice if your concern is going fast but for someone who wants a roomy, loaded up, full size sedan that offers great fuel economy – the 2013 Ford Taurus with the new 2.0L EcoBoost 4-cylinder could be an ideal vehicle.

Frank Sherosky wrote on June 27, 2012 - 10:07pm Permalink
Did Ford say how they are going to meet the 54.6 MPG mandate, because this is still not going to do it? They need to make EcoBoost with HCCI and/or Split Cycle to even get close to the required efficiency level.