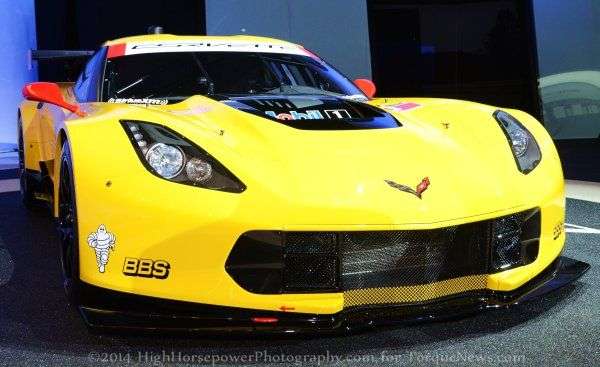 While sales of the stunning Chevrolet Corvette dipped just a bit in May 2014, the numbers are still substantially better than they were in the same month one year ago, allowing the C7 Corvette to continue to improve its annual growth rate – now up to 211.6% on the year.
Advertisement

As pretty much everyone in the United States is finally enjoying warm weather, sales of sports cars like the Chevrolet Corvette, the Chevrolet Camaro, the Ford Mustang and the Dodge Challenger grows as the idea of driving a high performance rear wheel drive model becomes far more appealing…you know, without snow to conquer. While the Challenger, Camaro and Mustang all saw big jumps over the previous month in May 2014, the Corvette actually took a small step back in monthly sales but with 3,328 units sold, the new Stingray still posted a very strong month.

With 3,328 happy new owners driving home in a new Chevrolet Corvette Stingray in fastback or convertible in May 2014, General Motors sold 268% more Corvettes than the company did in May of 2013 when only the C6 Corvette was available. In other words, this massive spike in sales is due to the new C7 Corvette Stingray – the car that many skeptics said wouldn’t succeed because the taillights aren’t round. May was the 3rd best month of the year and the 4th best over, following October 2013 when roughly 4,000 units went out (the first full sales month for the new C7), 3,514 in April and 3,480 in March. The “worst” month for the new Corvette thus far came in January, when the company sold just 2,261 units were sold, but when you consider how brutal the winter was for so many Americans, it isnt a huge surprise the sports car sales slumped a bit through the snowy months.

On the year, General Motors has now sold 15,021 examples of the Chevrolet Corvette Stingray. That early total amounts to a 211.6% increase over the first five months of 2013, prior to the new C7 hitting dealerships around the country. After the new C7 Corvette Stingray was introduced in January 2013, sales slumped as prospective buyers held off for the arrival of the new Stingray so through the first five months of 2013, GM sold only 4,820 Corvettes. Because of that expected slump, the growth percentages are a bit skewed, but the C7 Corvette is still selling incredibly well.

Best of all, the C7 Stingray will only get better with the arrival of the 2015 Chevrolet Corvette later this year. In addition to the 2015 Z06 introducing the world to the most track capable Corvette of all time, the 2015 model year will bring about the new 8-speed transmission for the Stingray fastback and convertible. This new gearbox will improve performance and fuel economy so the self-shifting Corvette will become that much more enticing in the new model year. The 2015 Corvette Stingray will also benefit from a few new appearance packages that will allow buyers to customize their C7 without dealing with a body shop and the aftermarket. These features likely wont have a massive impact on sales, but these changes will help to add a little something special to keep the Corvette fresh…even though it is still pretty fresh from the debut.