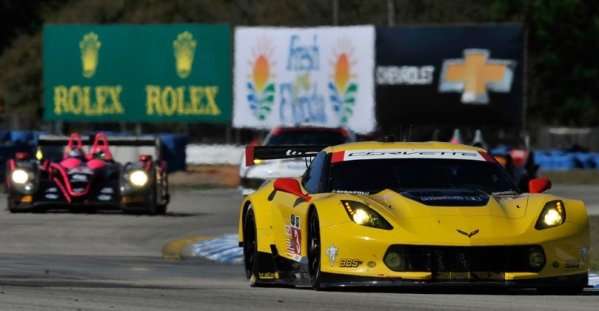 The field for the 2014 12 Hours of Sebring race have completed all four practice sessions and for the first time this season, the Chevrolet Corvette C7R race cars look to be the teams to beat in this weekend’s historic endurance race – while the cross town rival SRT Viper GTS-R teams struggled throughout most of the four practice runs.
Advertisement

The Chevrolet Corvette C7R race teams haven’t exactly had the start to the season that they had hoped with mechanical problems taking them out of contention at the Rolex 24 at Daytona Motor Speedway followed by a lackluster showing at the Sebring Winter Practice sessions a few weeks back. Fortunately, things are looking up for fans of the Corvette Racing program as the two team cars took turns at the front of the field in today’s 12 Hours of Sebring practice sessions.

The Corvette C7R teams got off to a strong start in the first practice session, with the #4 Corvette turning in the 2nd fastest lap in the GTLM field while the #3 Corvette put down the 3rd quickest lap time. Both of the Corvettes were within 8 tenths of a second of the class leading Ferrari F458 Italia. In round two, the #4 Corvette held onto the 2nd spot in the class - this time behind the #912 Porsche 911 RSR – while the #3 team car slipped back to the 5th spot in the class. In the 2nd round, the #4 Corvette was less than a tenth of a second behind the class leader and the #3 C7R was about 6 tenths off of the leading pace.

In the third practice session of the day for the 2014 12 Hours of LeMans race, the #4 Corvette C7R came out flying and managed to turn in the best time of the session among the GTLM class, beating the 2nd place BMW by better than a half second. Things didn’t go quite as well for the #3 Corvette in the third round of practice as that half of the team only turned in the 6th best time in the class, but that changed in the 4th round of practice. After being the “slower” of the two Corvette Racing teams throughout the first three sessions, the #3 Corvette C7R turned in the fastest practice lap time of any GTLM car, beating both of the BMW team cars by more than 2 tenths of a second. This strong showing in practice by both of the Corvette C7R race teams sets them up for success in tomorrow’s race – marking the first time this season where the Corvette Racing program has really been the one to beat.

Unlike the Corvette C7R racers, the SRT Viper GTS-R teams have enjoyed a strong start to the season, but that good fortune hasn’t continued into the practice sessions for the 2014 12 Hours of LeMans. Both of the Viper teams spent much of the four practice sessions in the bottom portion of the 11 car GTLM class with positions of 8th and 9th in round one, 9th and 10th in round two and 10th and 11th in round four. Their only good showing of the day thus far came in the third round of practice where the #91 Viper GTS-R managed to turn in the 4th quickest time while the #93 Viper was 7th quickest in the class. In that best run of the day, the quicker of the two Vipers was about eight and a half tenths behind the Corvette that lead the GTLM class.

Practice only means so much but a strong run by both Corvette C7R teams and mediocre runs for the SRT Viper teams could be a precursor for what to expect from this weekend’s 12 hour long race at Sebring International Speedway. Qualifying for the GTLM class is going on right now and we will update you all as the final qualifying results become available!