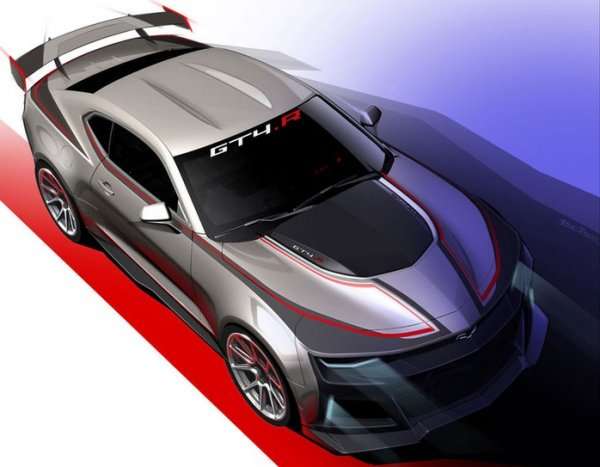 General Motors has rolled out their newest Chevrolet Camaro endurance race car based on the 6th generation ZL1 for a handful of road racing championships in the US and around the world – all with LT1 power.
Advertisement

The modern Chevrolet Camaro road racing program has been successful in past years, with Stevenson Motorsports claiming the 2015 IMSA Continental Tire SportsCar Challenge championship for the GS division in a Camaro Z/28.R and piling up plenty of race wins along the way. Unfortunately, that team changed divisions after the 2015 season and that meant the end of their Camaro program. In fact, at the end of the 2016 IMSA Continental Tire SportsCar Challenge, there were no Camaros in the GS field, leaving the new Ford Mustang GT350R-C to dominate the class. However, that is about to change, as General Motors has rolled out the newest Camaro endurance race car and Stevenson Motorsports will be the first team to campaign one – starting in just a few weeks.

“We are really pleased to be joining Chevrolet again, it is just a natural fit for us and there is a lot of excitement about this new Camaro and the GT4 cars in the Continental Tire SportsCar Challenge,” said team owner Johnny Stevenson. “We’ve got an outstanding team and we are well prepared to once again be racing in both of the Continental Tire SportsCar Challenge and IMSA WeatherTech events during these IMSA weekends. Hopefully we can get off to a quick start at COTA and be a factor once again this season!”

The Camaro GT4.R Endurance Racer
The 2017 Chevrolet Camaro GT4.R race car is based on the 6th gen Camaro ZL1 and in cooperation with General Motors, the endurance racing experts at Pratt & Miller handled the conversion from street car to race car. Pratt & Miller is also responsible for the development of the current Corvette C7.R program, which is only a small part of their long, successful history of building championship race cars.

Next, Pratt & Miller removed the supercharged LT4 of the ZL1, opting instead for a new LT1 built to unique racing specifications. This is, of course, the same engine that powers the current Camaro SS and Corvette Stingray, but we can expect that it makes a little more power than the road cars – while also having a beefed up oiling and cooling system to handle the rigors of endurance racing. The power from that race-spec LT1 is channeled through a 6-speed Xtrac sequential transmission, which is controlled by paddles on the steering wheel.

Finally, the standard body of the Camaro ZL1 is aerodynamic, but enough for the world of endurance racing, so Pratt & Miller added an assortment of adjustable body bits, including a huge rear wing, a front splitter and dive planes on the front corners.

Camaro Returns to the Continental Tire SportsCar Challenge
The first team which will campaign the new Chevrolet Camaro GT4.R is Stevenson Motorsports, which drove a Camaro to the GS championship of the Continental Tire SportsCar Challenge back in 2015. Matt Bell and Robin Liddell will be the full time drivers for the #57 Stevenson Motorsports Camaro GT4.R and their key competitors will be the guys from Multimatic Motorsports and their Ford Mustang GT350R-C race cars.

In Stevenson’s absence, Multimatic dominated the field in 2016, winning 6 of the 10 races last year and finishing 2nd in 2 other races en route to a class championship. However, Stevenson is returning to the GS class at the Circuit of the Americas on May 4-6.