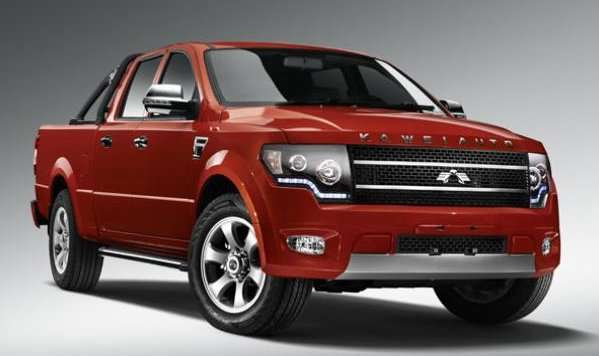 Check Out the Cheap Chinese Version of the Ford F150

Chinese manufacturers are well known for producing cheap knock-offs of name brand items and the Ford F150 is the latest target – with Chinese automaker Kawei obviously designing their K1 pickup after the look of the current half ton Ford pickup.
Advertisement

What are you looking at in the image above probably looks like a current generation Ford F150 that is owned by someone who spends entirely too much time buying add-ons at the local auto parts store. It has some tacky looking projection headlights, a custom grille, some gaudy chrome mirror caps, a rollover bar that appears to be made of plastic, a set of Walmart spec aluminum wheels and even some generic fender vents similar to the ones that come on the SVT Raptor. Most Ford truck fans would look at this monstrosity and think “how sad that someone did that to the poor F150”…but they would be wrong. This isnt the Ford F150 with a bunch of cheap mods from Walmart and Autoxzone; this is the Kawei K1. It is built by Chinese manufacturer Kawei Auto and in the past year, the company has built and sold about 10,000 units of this thing in China, Africa and the Middle East.

The Kawei K1 looks very much like a tastelessly modified F150 on the outside, but things are very different inside and under the hood. The interior is similar only in the fact that it is inside of a pickup truck, with the dashboard area and seats of the K1 looking more like a 10 year old Ford truck than the newer versions on which the exterior styling was based. Also, where the F150 comes with a couple V6 engines and a couple V8 engines, the Kawei K1 comes with the buyer’s choice of 2.4L 4-cylinder with 141hp and 148lb-ft of torque or a 3.2L diesel with 106hp and 181lb-ft of torque – both of which are mated to a standard 5-speed manual transmission.

Over the past few years, the Chinese auto industry has offered up a seemingly endless trail of junky, low quality vehicles that are very obviously knock-offs of vehicles from other automakers. From Toyota to Bentley, Chinese automakers have made their own versions of popular cars for their domestic market and in some cases, automakers have taken legal action over their vehicle designs being ripped off. Ford Motor Company has made it very clear in the past few years that they do not take their trademark rights lightly – going so far as to go after Ferrari for naming one of their open wheel race cars the F150 as a celebration of 150 years of Ferrari performance. Ford pursued legal action over someone using the F150 name on a race car that wasn’t sold to the public, so you would have to think that the Motor Company isn’t too pleased about a Chinese company selling a cheap knock off of the bestselling vehicle in the USA.

What does Kawei think about the suggestions that the K1 is based on the Ford F150? Not only do they recognize the fact, but they go so far as to boast about it in their marketing materials…referring to the front end design to being similar to that of the “Ford Raptor”. So, not only did the company plan for this cheap knock-off to look like a Ford F150 – they intended for it to look like the top of the line Raptor.

If you are surprised that the company has managed to sell 10,000 examples of this knock-off F150, it should be pointed out that they sell for around $16,000 so buyers are getting a vehicle that looks like one of the bestselling trucks in the world and they are doing so for about the price of a Ford Fiesta. All in all, we shouldn’t be all that surprised that Kawei sells thousands of knock-off Ford F150 pickups, considering that the streets of every major American city are littered with vendors selling knock-offs of everything from shirts to watches to purses. It just took the Chinese auto industry some time to catch up with the companies that make smaller junk to sell in the US market.